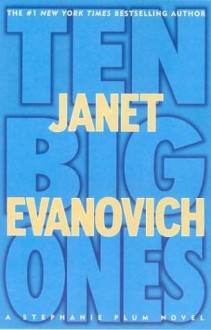 It begins as an innocent trip to the deli-mart, on a quest for nachos. But Stephanie Plum and her partner, Lula, are clearly in the wrong place at the wrong time. A robbery leads to an explosion, which leads to the destruction of yet another car. It would be just another day in the life of Stephanie Plum...except that she becomes the target of a gang. And the target of an even scarier, more dangerous force that comes to Trenton. With super bounty hunter Ranger out of town (and Stephanie on the outs with vice cop Morelli), she finds herself alone, with a decision to make: how to protect herself and where to hide while on the hunt for a killer known as the Junkman. There's only one safe place, and it has Ranger's name all over it-if she can find it. And if the Junkman doesn't find her first. With Lula riding shotgun and Grandma Mazur on the loose, Stephanie Plum is racing against the clock in her most suspenseful novel yet. Ten Big Ones is page-turning entertainment and Janet Evanovich is the best there is.
show less
Format: mass market paperback
ISBN: 9780312936228 (0312936222)
Publish date: 2005-06-21
Publisher: St. Martin's Press
Pages no: 352
Edition language: English
Category:
Adventure, Humor, Mystery, Contemporary, Chick Lit
Series: Stephanie Plum 2 (#10)

3 years ago
http://bookjunkie57.booklikes.com bookjunkie57 4.0 Ten Big Ones
text Ten Big Ones
Stephanie Plum, Book 10 I Picked Up This Book Because: Continue the series. The Characters: Stephanie Plum: Lula: Joe, Ranger, Connie, Various people who keep trying to kill Stephanie The Story: There was nothing all that new in this story that we haven’t seen before but I’m still so entertain...
See review

8 years ago
http://MarthaSweeney.booklikes.com Martha Sweeney 4.0 Ten Big Ones
text Ten Big Ones
I enjoyed many of the Stephanie Plum series when I was a teenager and young adult. However, now that I'm older and have read a few of the more recent additions, I'd have to say I'm a little disappointed. There hasn't been much character development or movement forward. It's the same general routi...
See review

9 years ago
http://wyvernfriend.booklikes.com Wyvernfriend Reads 4.0 Ten Big Ones
text Ten Big Ones
Never, ever start reading Janet Evanovich when going to bed, cause you just won't stop, I really enjoyed this. Stephanie Plum continues to amuse, the tension between her, Ranger and Morelli continues and another of her cars blows up. This time there's a price on her head!
See review

9 years ago
http://Denise.booklikes.com Denise 3.0 Ten Big Ones (Stephanie Plum Series #10)
text Ten Big Ones (Stephanie Plum Series #10)
Overall I did enjoy this one but Stephanie's immaturity and stubbornness really got on my nerves. Her ineptness just didn't seem humorous in this one but annoying. I really liked that we finally got to see were Ranger lives (it wasn't that bat cave but at least it was something). I still plan on con...
See review
see community reviews