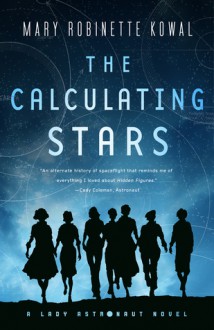 One of these new entrants in the space race is Elma York, whose experience as a WASP pilot and mathematician earns her a place in the International Aerospace Coalition’s attempts to put man on the moon. But with so many skilled and experienced women pilots and scientists involved with the program, it doesn’t take long before Elma begins to wonder why they can’t go into space, too—aside from some pesky barriers like thousands of years of history and a host of expectations about the proper place of the fairer sex. And yet, Elma’s drive to become the first Lady Astronaut is so strong that even the most dearly held conventions may not stand a chance.
show less
Format: ebook
ISBN: 9781466861244
Publish date: 2018-07-03
Publisher: Tor Books
Pages no: 384
Edition language: English
Category:
Science Fiction
Series: Lady Astronaut (#1)

9 months ago
http://Graculus.booklikes.com Grac's Never-ending TBR Pile of Doom 5.0 The Calculating Stars - Mary Robinette Kowal
text The Calculating Stars - Mary Robinette Kowal
This is another book on the shortlist for Best Novel at the Hugo Awards and then my local library picked up a copy of both this and the sequel (The Fated Sky), which discovery delighted me greatly. While I appreciate reading ebooks for sheer portability, and of course ARC tend to come in this format...
See review

2 years ago
http://DMS.booklikes.com Saturdays in Books 5.0 Review: The Calculating Stars
text Review: The Calculating Stars
Alt-history & hard SF where a meteorite crashes off the east coast, forcing the ramp up of manned spaceflight in the 50's. The main character is a computer with a doctorate in physics who wants to be an astronaut, but sexism. This is excellent, warm, funny, sad, and everything in between.. This i...
See review
see community reviews