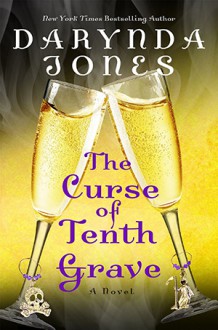 The Curse of Tenth Grave
by: Darynda Jones (author)

As a Part-time PI and fulltime grim reaper, Charley Davidson has asked a lot of questions throughout her life: Why can I see dead people? Who is the hot supernatural entity following me? How do I get gum out of my sister's hair before she wakes up? But, "How do I trap not one malevolent god, but three?" was never among them. Until now. And since those gods are on earth to kill her daughter, she has little choice but to track them down, trap them, and cast them from this dimension.

There's just one problem. One of the three stole her heart a very long time ago. Can the Razer, a god of absolute death and destruction, change his omniscient spots, or will his allegiances lie with his brothers?

Those are just a few of the questions Charley must answer, and quick. Add to that a homeless girl running for her life, an innocent man who's been charged with murdering the daughter of a degenerate gambler, and a pendant made from god glass that has the entire supernatural world in an uproar, and Charley has her hands full. If she can manage to take care of the whole world-destroying-gods thing, we're saved. If not, well...
show less
Format: hardcover
ISBN: 9781250078193 (1250078199)
Publish date: 2016-06-28
Publisher: St. Martin's Press
Pages no: 352
Edition language: English
Category:
Paranormal, Urban Fantasy
Series: Charley Davidson (#10)

3 years ago
http://miduhadi.booklikes.com Midu Reads 3.0 The Curse of Tenth Grave — Sigh!
text The Curse of Tenth Grave — Sigh!
As you know, I have already railed about the many issues that I find in the books in this series. But I have to see it to the end, so I keep plodding on. I won’t be rehashing those problems because I believe if a reader finds a book problematic, they should just stop reading it. Reading the subseque...
See review

4 years ago
http://bookjunkie57.booklikes.com bookjunkie57 4.0 The Curse of Tenth Grave - ReRead
text The Curse of Tenth Grave - ReRead
Re-Read:April 17 - April 19These stories never cease to amaze me. Even the second time around. Everything so interconnected and the bigger picture is always looming and I’m on the edge of my seat like I don’t know what is going to happen. #sillyme
See review

6 years ago
http://AVoraciousReader.booklikes.com A Voracious Reader 5.0 NetGalley November
text NetGalley November
*Book source ~ NetGalley Charley Davidson is a PI, grim reaper, wife and mom. She has a lot on her plate at the moment, but nothing as important as trapping three gods in the god glass pendant before they find her daughter. Still, it’s nothing she can’t handle. Right? Ummm… Omg, I’m still loving...
See review