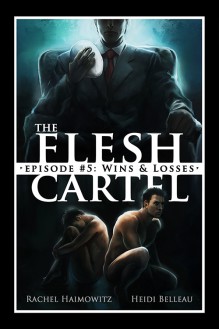 Walking the line with Mat is especially challenging. Too severe a hand leaves him fearful, even broken, but too light a touch leaves him disobedient and full of fury. Dougie, on the other hand, wants desperately to end his suffering and loneliness and fear. But his unwillingness to disappoint his brother means he can’t bring himself to submit.

Controlling Mat with pain alone is futile, so Nikolai must take a defter route by decoding Mat’s deeper desires: why does he fight, and why does he want so badly to win? By contrast, Dougie may need a firmer touch than the pleasure and affection Nikolai has so far shown him. To convince Dougie of how much he stands to gain by giving all of himself to Nikolai, he must first teach him how much more he has left to lose.
show less
Format: ebook
ISBN: 9781937551742 (1937551741)
Publish date: 2013-03-04
Publisher: Riptide Publishing
Pages no: 75
Edition language: English
Category:
Glbt, M M Romance, Gay Romance
Series: The Flesh Cartel (#5)

9 years ago
http://DebraE.booklikes.com Debra E's Never-Ending TBR 4.0
text
Oh Nikolai, you crazy bastard, I just want to punch you in the face every time you open your mouth. The mind games keep going in this episode as Nikolai continue his quest to sever the brothers' loyalties to each other.Poor Dougie, just barely keeping hold of himself. As much as he knows what is h...
See review

9 years ago
http://Breann.booklikes.com Breann 4.0
text
"Pain and ecstasy and burning need and Nikolai, Nikolai looming above it all like the world's most polite puppet master." For reals.
See review

9 years ago
http://lacrimsonfemme.booklikes.com La Crimson Femme 3.0
text
Another winner! This is a 3.5 star book. The mind-fucking is heating up as sadistic Nikolai tortures both Dougie and Mat mentally. Nikolai is quite gentle in this installment. He doesn't beat either one of them, but he does force them to unwillingly submit to his conditioning. I love how Nikola...
See review
see community reviews