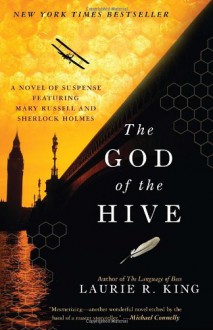 The God of the Hive
by: Laurie R. King (author)

Unstoppable together, Russell and Holmes will have to survive this time apart, maintaining contact only by means of coded messages and cryptic notes. But has the couple made a fatal mistake by separating, making themselves easier targets for the shadowy government agents sent to silence them?

A hermit with a mysterious past and a beautiful young female doctor with a secret, a cruelly scarred flyer and an obsessed man of the cloth: Everyone Russell and Holmes meet could either speed their safe reunion or betray them to their enemies—in the most complex, shocking, and deeply personal case of their career.
show less
Format: paperback
ISBN: 9780553590418 (0553590413)
Publish date: 09-08-2011
Publisher: Bantam
Pages no: 372
Edition language: English
Category:
Historical Fiction, Mystery, Historical Mystery, Fiction, Historical
Series: Mary Russell and Sherlock Holmes (#10)

5 years ago
http://kaiespace.booklikes.com YA Fantasy - K.A. Wiggins 4.0 The God of the Hive
text The God of the Hive
Another excellent entry in the series. This is perhaps the most James Bond-ish of the lot; political machinations, spy action, secrets and danger all 'round.
See review

9 years ago
http://barbaralbstorey.booklikes.com Barbara L.B. Storey 4.0 The God of the Hive
text The God of the Hive
Another book in the Mary Russell and Sherlock Holmes series, which I love in general. This one was not as satisfying because the two main characters are separated for 90 percent of the book. The case is intriguing, and Sherlock's brother Mycroft's involvement is crucial, but the ending is a little...
See review

9 years ago
http://LisaMariaC.booklikes.com Lisa (Harmony) 3.5 Enjoyable, But Not a Favorite
text Enjoyable, But Not a Favorite
This is the tenth in the Mary Russell series, where King gives Sherlock Holmes an unlikely (on the surface) romantic and professional partner: Mary Russell, a feminist, American, Jewish, an Oxford theological scholar--and less than half his age. It works though, usually the Russell books are a compl...
See review

11 years ago
http://juliamarkovic.booklikes.com Read Fragment 4.0
text
Intertwining this mystery with the previous surface villain was a very clever move, building tension and risk without sacrificing the competence of any of the protagonists. Robin Goodman is a mysterious figure, and I still don't quite understand his place in the conclusion.
See review

A Book and A Review #2 rated it

12 years ago
http://abookandareview2.booklikes.com A Book and A Review #2 3.0
text
I didn't like this one as much as I have liked other Mary Russell Books...I felt this one kind of dragged on.
See review
see community reviews