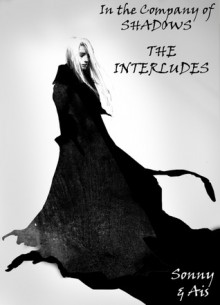 In the Company of Shadows series description:

Years after the bombs of WWIII have changed the physical and political landscape, the Agency ruthlessly works behind the scenes to take down rebel groups that threaten the current government. Their goals justify all means. Hsin Liu Vega (Sin) is their most efficient and deadly assassin ever. However, he tends to go off on unauthorized killing sprees and somehow his assigned partners all end up dead under suspicious circumstances. That is why the Agency has had him locked up in a box on the fourth floor for years. But now they think it is time to put the psychopath back in the field. With a new partner.

Boyd's mother, a high ranking Agency official, volunteers her teenage son for the position. Boyd is not afraid of death. In fact, his life has been such an endless cycle of apathy and despair for the last few years that he'd welcome it.

Can these two broken men form an efficient partnership? Can they learn to trust anyone, let alone each other? Sin doesn't give a fuck about the Agency, or the androgynous boy who holds the remote to the shock collar that is supposed to control him.

On the other hand, Boyd is strangely unafraid of the man everyone calls 'monster' and Sin seems reluctant to let his keeper get himself killed on any missions. Yet.
show less
Format: online only
Publish date: 2010
Publisher: Santino Hassell & Ais
Pages no: 913
Edition language: English
Category:
Glbt, M M Romance, Gay Romance
Series: In the Company of Shadows (#3)

8 years ago
http://hushabyebooks.booklikes.com Hushabyebooks 5.0 Interludes
text Interludes
Without a doubt this one is my favourite of the series so far. While reading it I just could not get over how far both Hsin and Boyd have come. I adored Monterrey and all that happened there but I was always a little uneasy about how intense their relationship was throughout that period, mostly bec...
See review

8 years ago
http://CristinaT.booklikes.com Cristina T. 5.0 Interludes
text Interludes
I decided to review the series as a whole, because it makes the most sense. So, try to bear with me, since this might get lengthy, and will contain a lot of gushing praise.First off, this series made me wonder how many amazing books I dismiss on the grounds of them not being 'my type' or being too l...
See review

8 years ago
http://sonianosia.booklikes.com Sonia Nosia ~Ruber's fiancé in Crystal Court universe~ 5.0 Interludes
text Interludes
AWESOME! This series is the bomb! I'm so fuckin' hooked I can't read anything else!!Also I luurve how everybody is so promiscuous!!! *cackles*When I'm done with the series I will try writing a review that does it justice (though I'll probably fail).
See review

9 years ago
http://Elsbeth66.booklikes.com ~~ Elsbeth ❤❤❤ MM-Romance ~~ 5.0 Interludes
text Interludes
Another addictive book…. I hated reading about Boyd an Kassian and although I liked the character Ivan, I only wanted Boyd and Sin together.Thank God this book was not full of angst as in Afterimage. I loved that Boyd finally understood that he couldn’t and didn’t want to live without Sin. But he wa...
See review

9 years ago
http://SusanReads.booklikes.com Susan 5.0 Interludes
text Interludes
Re-read Oct 6th.Just as beautiful as before.I will keep my review for this outstanding book short. Boyd and Sin, so beautiful together.BoydSinSin and Boyd have gone through a difficult time and now it is time to find a new balance. And I cannot express my feelings after reading Boyd’s beautiful conf...
See review
see community reviews