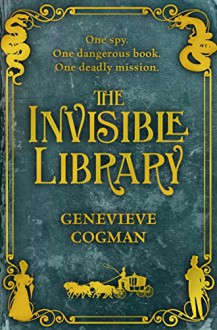 Stealing a book is standard, if required, but nothing has prepared them for the dangers in store. This world is chaos-infested, so the usual laws of nature have been bent to allow werewolves, fae and unpredictable magic. Irene's new assistant is hiding a few secrets of his own. And when they arrive, the book they seek has already been lifted - by a notorious lady cat-burglar. Plus London's underground factions seem prepared to fight to the death to get 'her book'.

Soon, she's up to her eyebrows in thieves, murderers, secret societies, the fae and giant mechanical centipedes. Good thing Irene can call on the aid of a deer-stalker wearing detective (who bears more than a passing similarity to a certain fictional sleuth) for assistance.

4 years ago
http://Evaine.booklikes.com Evaine's Books, Books and More Books 4.0 The Invisible Library by Genevieve Cogman - My Thoughts
text The Invisible Library by Genevieve Cogman - My Thoughts
My first finish of 2018 and what can I say? I really really enjoyed it! I think this book first came to my attention on one of the book blogs I follow when I read the blurb and found it had tons of things I enjoy. Books, libraries, undercover agents, secret societies, magic and chaos. The main cha...
See review
see community reviews