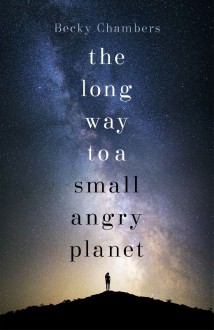 The Long Way to a Small, Angry Planet
by: Becky Chambers (author)

But Rosemary gets more than she bargained for with the Wayfarer. The crew is a mishmash of species and personalities, from Sissix, the friendly reptilian pilot, to Kizzy and Jenks, the constantly sparring engineers who keep the ship running. Life on board is chaotic, but more or less peaceful - exactly what Rosemary wants.

Until the crew are offered the job of a lifetime: the chance to build a hyperspace tunnel to a distant planet. They'll earn enough money to live comfortably for years... if they survive the long trip through war-torn interstellar space without endangering any of the fragile alliances that keep the galaxy peaceful.

1 year ago
http://Zanahoria.booklikes.com The better to see you, my dear 4.0 Comforting Space Opera
text Comforting Space Opera
That was such a cute comforting read. At first, I was a bit "meh", but it grew on me as I read. There is nothing groundbreaking or uniquely though provoking here, but more of a hodgepodge-crew-as-family gone on a long job, told in chapters of a more or less episodic nature. It's a bit like watchin...
See review

2 years ago
http://wyvernfriend.booklikes.com Wyvernfriend Reads 4.0 Space ship adventures
text Space ship adventures
When humans left a mostly destroyed earth ("When earth was all used up") humanity scattered to the stars. The Wayfarer is a ship that travels the stars and tunnels wormholes from various points. Into the mix comes Rosemary, a woman running from her past, or rather her family's past. She's never r...
See review

This, that, and the other rated it