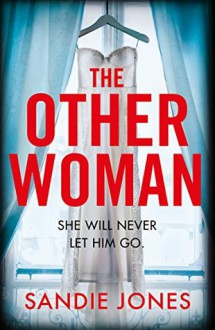 The Other Woman
by: Sandie Jones (author)

BUT SHE LOVES YOU NOT: Lurking in the shadows is a rival, a woman who shares a deep bond with the man she loves.

AND SHE'LL STOP AT NOTHING: Emily chose Adam, but she didn’t choose his mother Pammie. There’s nothing a mother wouldn’t do for her son, and now Emily is about to find out just how far Pammie will go to get what she wants: Emily gone forever.
show less
Format: ebook
ISBN: 9781250191984
Publish date: 2018-08-21
Publisher: Minotaur Books
Pages no: 304
Edition language: English
Category:
Thriller

3 years ago
http://Sandy.booklikes.com My Never Ending List 4.0 The Other Woman
text The Other Woman
I have to agree that this novel was addictive. For once I started it, there was no turning back and I couldn’t get this novel out of my head. My emotions swayed as the events played out and I started to think they were all crazy. Who would stay in such a crazy, mixed-up situation and put up with all...
See review

4 years ago
http://charlottelynn.booklikes.com charlottelynn 5.0
text
Psychological thriller is exactly what this book is. I was stuck to the edge of my seat while reading word after word, page after page, and chapter after chapter. I could stop reading. I won’t give it away but it seems no one is at he/she seems. Everyone has a secret and until the end of th...
See review

4 years ago
http://MommaSaysToRead.booklikes.com Momma Says to Read 3.0 The Other Woman
text The Other Woman
This one had me in its clutches the whole way. Right up until the ending. The storyline isn't anything I haven't seen before, but Jones kept it interesting. Emily is in a relationship with Adam, who appears to be a momma's boy. Adam's mother, Pammie, is controlling and conniving to the extreme and E...
See review

4 years ago
http://sensitivemuse.booklikes.com sensitivemuse 4.0 Beware of Pammie
text Beware of Pammie
Holy. Mother. (yup I said it) The moment I get into the first third of the book I had to keep going. I had to finish this book and see what will happen next. It was one thing after another and you were just waiting for who was going to snap first. There’s a lot of tension and the mood is high s...
See review

4 years ago
http://kathleenkelly.booklikes.com Celticlady's Reading Room 4.0 The Other Woman
text The Other Woman
“You’re never too old for your mum to care about you,” ― Sandie Jones, The Other WomanI never had the issue with a mother in law, but in reading this book, I find myself lucky I escaped this problem. That said, The Other Woman is a psychological thriller that has Emily, the book's protagonist, warri...
See review
see community reviews