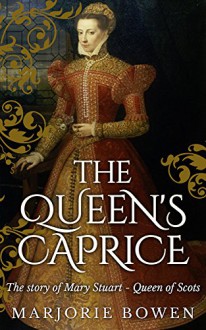 In this thrilling novel she is bought vividly back to life.

She is a woman shrouded in secrecy and surrounded by violence who has learnt to use her desirability to intoxicate her subjects into carrying out her will.

Yet despite this natural authority she cannot escape the domineering men who not only sway the court but the opinion of the people.

Lord Moray, her bastard half-brother, adores her more than his familial position should allow and vows not to let her into another man’s clutches.

Which compels her to marry the handsome but naïve Henry Stewart in act of rebellion.

But her husband’s disappointing nature drives her into the arms of the shrewd Italian servant David Rizzio.

And as acts of murder and treachery unfold, the Earl of Bothwell hovers as a tantalising presence on the outskirts, capturing the queen’s capricious attention.

‘The Queen’s Caprice’ is an enthralling historical romance set during the reign of one of Scotland’s most captivating monarchs.

Born in 1885, Marjorie Bowen (pseudonym of Margaret Gabrielle Vere Campbell Long) was one of Britain’s most prolific authors of the twentieth century. Writing was more than just a hobby: her works were the primary source of financial support for her family. Between 1906 and her death in 1952, Bowen wrote over 150 books, garnering much acclaim for her popular histories and historical and gothic romances. Alongside masterful descriptions and concise, efficient prose, she deftly rendered larger-than-life subjects in the minds of her readers. To this day, aficionados of the genres covet Bowen’s work.

Endeavour Press is the UK's leading independent digital publisher. For more information on our titles please sign up to our newsletter at www.endeavourpress.com. Each week you will receive updates on free and discounted ebooks. Follow us on Twitter: @EndeavourPress and on Facebook via http://on.fb.me/1HweQV7. We are always interested in hearing from our readers. Endeavour Press believes that the future is now.

4 years ago
http://CarpeLibrum.booklikes.com Carpe Librum 2.5 The Queen's Caprice by Marjorie Bowen
text The Queen's Caprice by Marjorie Bowen
I had requested this book without realizing that it was by the same author as Dickon and before I had started Bowen's Richard III novel.. Both books inspired me to skim sections, but this one was an improvement over Dickon because it does not include the same false medieval language that was so anno...
See review