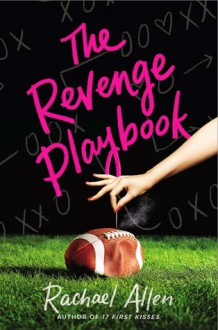 In the small town of Ranburne, high school football rules and the players are treated like kings. How they treat the girls they go to school with? That’s a completely different story. Liv, Peyton, Melanie Jane, and Ana each have their own reason for wanting to teach the team a lesson—but it’s only when circumstances bring them together that they come up with the plan to steal the one thing the boys hold sacred. All they have to do is beat them at their own game.

Brimming with sharp observations and pitch-perfect teen voices, fans of Jenny Han and Sarah Mlynowski are sure to fall head-over-heels for this sharp tale—by the author of 17 First Kisses—about the unexpected roads that can lead you to finding yourself.
show less
Format: Paperback
ISBN: 9780062281364 (0062281364)
ASIN: 0062281364
Publish date: 2015-06-16
Publisher: HarperTeen
Pages no: 368
Edition language: English
Category:
Young Adult, Romance, Contemporary, Sports And Games, Sports

5 years ago
http://emerjas.booklikes.com Emerjas 4.0 The Revenge Playbook
text The Revenge Playbook
Liv, Peyton, Melanie Jane, and Ana are sick and tired of how the football players of their school get away with everything and how they treat girls. So they've banded together to get revenge on them and try to change things. All they have to do is steal the boys' prized football by completing the fo...
See review

5 years ago
http://deniz.booklikes.com Closet Geeks and Slow Mo 3.5 Review: The Revenge Playbook
text Review: The Revenge Playbook
3.5 Stars So I expect a cute & fluffy about love and friendship with some fun action thrown in... I mean look at the cover! The cover slut in me, was so sure this was going to be a cute read, then read the blurb.. Says cute & fluffy alright, doesn't it?But while there is a bit of romance, there are ...
See review

5 years ago
http://Mehsi.booklikes.com Twirling Book Princess 5.0
text
This is the review for the ARC.Liv, Melanie Jane, Ana and Peyton, 4 girls, and they couldn't be different. But they are united for one goal. Get revenge on/kick the football team's ass. It is something that is shown often in books, football (or any other sport) getting preference in school, allowed ...
See review

Poisoning with words rated it

6 years ago
http://Glire.booklikes.com Poisoning with words 3.0 The Revenge Playbook
text The Revenge Playbook
"I want football players to be treated like everybody else, and for the guys at this school to realize that rape culture isn’t something feminists invented so they could have something new to be pissed about, and so many other things I don’t even have words for yet."Finalmente, luego de un poco mas ...
See review

6 years ago
http://brebeaumont.booklikes.com brebeaumont 5.0 The Revenge Playbook
text The Revenge Playbook
"if you had told me two months ago that the four of us wold be sitting together in this car, i never would have believed you."i don't even know where to start with this book, so let me just say that i loved it. i loved every word, sentence, paragraph, page, and chapter completely and totally. admitt...
See review
see community reviews