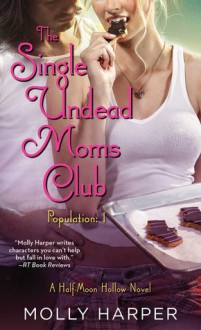 On top of post-turning transition issues, like being ignored at PTA meetings and other mothers rejecting her son’s invitations for sleepovers, Libby must deal with her father-in-law’s attempts to declare her an unfit mother, her growing feelings for Wade—a tattooed redneck single dad she met while hiding in a closet at Back to School Night—and the return of her sire, who hasn’t stopped thinking about brave, snarky Libby since he turned her.
show less
Format: paperback
ISBN: 9781476794396 (1476794391)
ASIN: 1476794391
Publish date: 2015-10
Publisher: Simon & Schuster
Pages no: 320
Edition language: English
Category:
Fantasy, Paranormal, Romance, Paranormal Romance, Vampires
Series: Half Moon Hollow (#4)

7 months ago
http://RachelGoodbyeBorders.booklikes.com Rachel's books 3.5 The Single Undead Moms Club
text The Single Undead Moms Club
Libby decided to turn into a vampire to be able to be there for her son as her grows up. She had cancer and it wasn't responding to treatment. This had the typical MH humor/snark that her books have. However, it was a bit more serious with a young child and a custody battle in the mix.I enjoyed Jane...
See review

3 years ago
http://Zanahoria.booklikes.com The better to see you, my dear 2.5 Cute
text Cute
It was not outrageously fun like "And one last thing...", and could have done without the murder hit ass-pull escalation (seriously, what need was for that given the over-all tone?), but I liked it. It was a comfy, easy read to get some smiles and dig myself out of a mild reading slump.
See review

4 years ago
http://shygirl.booklikes.com Shygirl: Reading After Midnight 4.5 Molly Harper FTW!!!
text Molly Harper FTW!!!
For me, reading a new Molly Harper story is like getting a huge gift from the literary Gods. I can always count on lots of chuckles (or outright guffawing), a crazy cast of characters who are too charming not to like, and a HEA that will leave me sighing happily. Libby’s story hit those points and s...
See review

4 years ago
http://jenn.booklikes.com Murder by Death 4.5 The Single Undead Moms Club
text The Single Undead Moms Club
Anyone who has read Molly Harper's books, specifically the ones that take place in Half Moon Hollow, know why I bought this book: Half Moon Hollow stories are pure fun. I was worried when it arrived as a love triangle is central to the story, and love triangles are evil. I needn't have worried...
See review
see community reviews