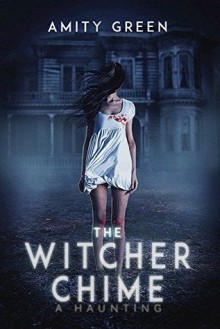 The Witcher Chime: A Haunting
by: Amity Green (author)

Savannah Caleman’s family has been coming apart since the early 1920’s. After a horrific suicide by their great aunt, the Calemans sell off the family ranch, hoping to leave the stigma of insanity behind and gain a fresh start at a property known by locals as “The Witcher Place.” Days after the move, Savannah’s father isn’t himself and her mother grows increasingly distant. Her little brother, Chaz, is forced out of a second story window by a being that makes Savannah question her sanity for the first time. Her mother takes Chaz and flees the state. Savannah and her younger sister, Molly, are chased home by a mountain lion but when Savannah turns to look back, the cat has transformed into a man. Their father’s behavior takes a more serious twist as horror abounds and Savannah turns to distant relatives for answers, fearing the insanity is real and has spread. Her father is no longer in control. Armed with a shotgun, Savannah is forced to protect herself and her sister.

The evil plaguing her family dons a suit and tie and introduces himself, giving Savannah an ultimatum. She must decide between her sister’s safety and aiding a monster that can’t be identified as either an angel or a demon. Either way, Savannah is torn, and takes to single-handedly running the family affairs with precision as she takes care of her sister. The Witcher Place is transformed to her liking using family money. Distractions are only that. Releasing a monster to roam at will isn’t a stellar option, no matter the promises it makes. The stain of murder and torment cannot be erased. He has fallen, been shackled, and now has plans to rise once more using Savannah as the key to regain grace.
show less
Format: ebook
ISBN: 9780692705858 (0692705856)
Publish date: 2016-07-31
Publisher: Petrichor Press
Pages no: 262
Edition language: English
Category:
Paranormal, Thriller, Horror

3 years ago
http://debbieattenborough.booklikes.com debbiereadsbook 3.0 really not sure what I read!
text really not sure what I read!
Independent reviewer for Archaeolibrarian, I was gifted my copy of this book. Jumping straight in, here! Dark, deadly, horror, that confused the hell out of me!! Seriously, this book is weird. It moves, in places, at rocket speed, and I struggled to keep up. In other places, its full of stuff that I...
See review
see community reviews