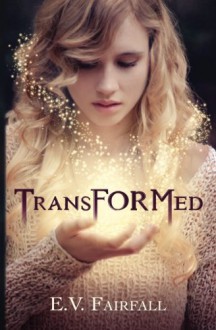 He's also a hunter who has tormented Thea for years. She believes if she could teach Brice compassion, she might finally be able to save her creations and herself from his savage ways. Then she meets Chamber: another hunter.

She soon finds herself fascinated by−and torn between−the two boys: Brice and Chamber. Lost within a torrent of human emotions, Thea starts to lose who she is as she falls in love with the one thing that she's always hated: a hunter… a human.
show less
Format: paperback
ISBN: 9780991283200 (991283201)
Publish date: January 1st 2014
Publisher: R Mind
Pages no: 273
Edition language: English
Category:
Romance, Paranormal Romance

6 years ago
http://Mishker.booklikes.com 100 Pages A Day...Stephanie's Book Reviews 3.5 Transformed
text Transformed
Many, many years ago two beings of light crash landed on the Earth, destroying everything. The Earth gave them a new form and they set to work re-creating everything that had been destroyed. After millions of years, the humans they created know them as God and Mother Earth. Mother Earth roams the wo...
See review

Books and Ashes rated it

6 years ago
http://booksandashes.booklikes.com Books and Ashes 4.0 Transformed
text Transformed
What I liked: I loved the concept of this book, it's different from others that I've read before. Thea is Mother Earth herself, and spends quite a bit of time in the book as an animal, and being human for her is harder than she thought since she doesn't understand them and their ways. She's only hum...
See review

7 years ago
http://iambookseater.booklikes.com Books Eater 5.0 Transformed
text Transformed
An interesting and intriguing fantasy about two siblings. Thea and her brother destroyed everything on Earth when they came here. They thought that if they could give back what they took, then they will be free of Earth's pull. They are immortal and their light created everything on this planet. The...
See review

7 years ago
http://kimberlylwheaton9.booklikes.com Kimber Leigh Reads 4.5 Review: Transformed by E.V. Fairfall
text Review: Transformed by E.V. Fairfall
I received this book from the author in exchange for an honest review Transformed is a sweet fantasy romance with endearing characters and an intriguing plot. I am a major animal lover, so I could relate to Thea and her adoration for her creations. This story combines mythologies with religion in an...
See review

7 years ago
http://jnovachek.booklikes.com Jasmyn's Reviews 3.0 Transformed by E.V. Fairfall
text Transformed by E.V. Fairfall
Transformed is an interesting story. I had to think on it a couple days before I could write a review. This is generally a good sign, because even a fun read should make you think just a little. Thea is an entity that can take on just about any form. When she takes on the form of a human to try and ...
See review
see community reviews