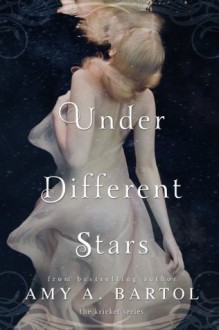 Under Different Stars
by: Amy A. Bartol (author)

Kricket Hollowell is normally not one to wish upon stars; she believes they’re rarely in her favor. Well versed at dodging caseworkers from Chicago’s foster care system, the past few years on her own have made Kricket an expert at the art of survival and blending in. With her 18th birthday fast approaching, she dreams of the day when she can stop running and find what her heart needs most: a home.

Trey Allairis hates Earth and doubts that anyone from his world can thrive here. What he’s learning of Kricket and her existence away from her true home only confirms his theory. But, when he and Kricket lie together under the stars of Ethar, counting them all may be easier than letting her go.

Kyon Ensin’s secrets number the stars; he knows more about Kricket's gifts than anyone and plans to possess her because of them. He also knows she’s more valuable than any fire in the night sky. He’ll move the heavens and align them all in order to make her his own.

When everything in their world can be broken, will Kricket rely upon love to save her under different stars?

4 years ago
http://KateM.booklikes.com Kitty Horror 3.0 Under Different Skies
text Under Different Skies
*Disclaimer: I received a copy of this book through Netgalley in exchange for an honest review.*Kricket is trying to live under the radar until she turns 18 and no longer a concern for social services. A few months shy of her birthday she is abducted by a group of men who take her to another world, ...
See review

Jess Loves to Read! rated it

7 years ago
http://jesscreason.booklikes.com Jess Loves to Read! 5.0 Under Different Stars
text Under Different Stars
I received a copy of this book from the publisher via NetGalley in exchange for an honest review.*Disclaimer: Spoiler-ish of first chapter only*At the very beginning of the book, the main character, Kricket, reveals that she was in foster care and is taking precautions to avoid DCS until her 18th bi...
See review

7 years ago
http://Flicker.booklikes.com Flicker Reads 3.5 Not so different, really
text Not so different, really
A fun little YA fantasy romance. Reminds me of Flash Gordon with its silly fantasy world that is different when the author wants to highlight the differences, otherwise similar in every conceivable way. I enjoyed Kricket, the main character - strong, stubborn, intelligent. Too bad that whole thing i...
See review

8 years ago
http://Butterfrog.booklikes.com Cozy Claws and Dusty Bones 4.0 Under Different Stars
text Under Different Stars
4 stars *E-arc provided by Netgalley I've read a couple of really brutal reviews of this book. So I was hesitant to read it but I am really glad I did. Once I started it I was hard put to sit it down. I finished it in just a few hours.- Yes, it has a few standard YA cliche's - Yes, the MC can ...
See review

Books by Amy A. Bartol

Sea of Stars - Amy A. Bartol