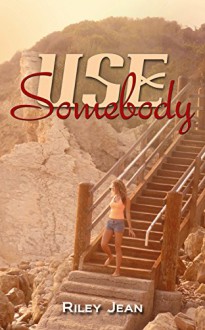 Use Somebody
by: Riley Jean (author) Joanne LaRe Thompson (editor)

Reeling from a traumatic and heart-shattering night, Scarlett Rossi escapes back to her hometown, a place that never changes, though nothing about her is the same. The new Scar is fierce. Untouchable. And resolved to bury the twisted nightmares of that horrible night… the night when everything was stolen from her… the night that divided her life into two: before him, and after.

When do-gooder Vance Holloway makes it his personal mission to cheer up the new girl at work, he has no idea what he’s getting himself into. Scarlett’s tough shell and spicy attitude doesn’t fool him. He knows deep down, that sweet, innocent smile still exists, and he’ll stop at nothing to prove it. Patience, persistence, and a little ice cream pay off. Slowly they become friends. Then best friends. Then more. Only one problem: he was never supposed to fall in love.

So begins an explosive tryst of pull and resistance, between one worthy white knight, and the damsel who doesn’t want to be saved. Scarlett won’t survive another heartbreak, but can their friendship survive a compromise?

If Vance is so determined to break down these walls, he’ll have to learn—just as she did—that when it comes to things like trust and love, there are always consequences.

Because the last man that she loved swore to protect her, then paid with his life. And took with him a piece of her soul.

Now Scarlett must decide if true strength means guarding her heart, or surrendering to it once more. One final secret remains: what really happened the night she swore she’d never love another man, and whose hands are stained with his blood?

7 years ago
http://TBalla04.booklikes.com 99 problems, and a book ain't one 4.0 USE SOMEBODY BY: RILEY JEAN
text USE SOMEBODY BY: RILEY JEAN
Where do I even start?! I guess the first thing that comes to mind is that one of the things I really enjoyed about this book were the things that it made me think about myself. First of which being that I found myself about 300 or so pages into this story thinking, "Oh come on, when is Scar going t...
See review
see community reviews