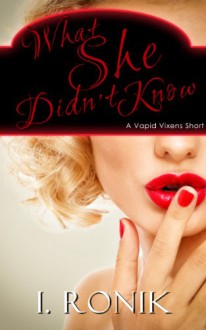 What She Didn't Know
by: I. Ronik (author)

8 years ago
http://Lyndi.booklikes.com Lyndi 2.0 What She Didn't Know
text What She Didn't Know
First of all, the author recommends you read this in a "Valley Girl voice"... but the character isn't at all Valley Girl. She works at a book store, is the Plain Jane of the family, and the only similarity I see between her and a Valley Girl is that they're both blonde and stupid. But that covers a ...
See review

My Reading Nook rated it

8 years ago
http://readingnookblog.booklikes.com My Reading Nook 5.0 Perfection!!
text Perfection!!
This novella is rather short at 36 pages, but it packs a solid punch. What She Didn't Know is everything that I roll my eyes at in romance novels. WSDN makes one [read, me] think about what we have been willing to let slide in this genre. I laughed until tears leaked from my eyes and my stomach hur...
See review

8 years ago
http://rabbit.booklikes.com Rabbit Reads 4.0 What She Didn't Know
text What She Didn't Know
This book was a hilarious satire on the romance/paranormal romance genre. It had all the stereotypes, insta-love, love scenes, and a happy ending. It was also extremely well-written. I initially had this book at 3 stars, but now I'm going to bump it up to four.
See review

8 years ago
http://emmytuck.booklikes.com Tuck's Book Nook 4.0 What She Didn't Know, by I. Ronik
text What She Didn't Know, by I. Ronik
First of all, let's take a moment to appreciate the author's name. I. Ronik. hehe Don't get it? Try saying it out loud. There you go ;) Anyway, as a short little parody this was pretty well done. In 36 pages it manages to poke fun at a number of romance tropes. I think it could have gone even fart...
See review

Books by I. Ronik