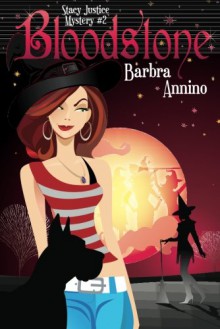 Then a man is found dead at Stacy’s grandmother’s bed-and-breakfast, and she has no choice but to see where Ivy’s story leads. Strange warnings appear at every turn, including the disappearance of the family’s Blessed Book, and it seems someone is out to kill Stacy—again. Picking up where Opal Fire left off, the second book in the spellbinding Stacy Justice series dazzles with even more magic, mystery, and mayhem—revealing the dark secrets of the Geraghty clan.
show less
Format: paperback
ISBN: 9781612186139 (1612186130)
ASIN: 1612186130
Publish date: 2012-12-18
Publisher: Thomas & Mercer
Pages no: 296
Edition language: English
Category:
Paranormal, Mystery, Paranormal Mystery
Series: A Stacy Justice Mystery (#2)

8 years ago
http://cassandrareads.booklikes.com Cassandra Reads 3.0 Bloodstone [Barbra Annino]
text Bloodstone [Barbra Annino]
I didn't really like Ivy's little entries. I think it was all of the capital letters where there didn't really need to be capital letters. All this mess for a page in a book seemed a little much. Murder, near murder, and people lying all over the place. It was none stop action but there were some po...
See review

If wishes were horses... rated it

9 years ago
http://setaian.booklikes.com If wishes were horses... 4.0
text
★★★☆ 3.5 StarsAt the end of book one Stacey met Ivy, a young girl claiming to be her sister. Ivy tells her that their mother has been kidnapped and she needs her help to set her free. But much more is going on and while they are searching for answers, someone is hunting them. Bloodstone is a light...
See review

9 years ago
http://jenn.booklikes.com Murder by Death 4.0 Bloodstone (Stacy Justice Mystery #2)
text Bloodstone (Stacy Justice Mystery #2)
A very entertaining, fast read. Stacy has a great sense of humour and snark and the characters that surround her are all interesting on their own. I found the first half a bit tedious, because I found the character of Ivy to be silly (but really, what 14 year old isn't?) but throughout the second ...
See review

10 years ago
http://dblue.booklikes.com dblue 4.0
text
This book was fun and fast paced. The characters are entertaining although some of the things that occur had me stopping and saying - now wait a minute a kid could not go there. But other than that, it was great. A refreshing paranormal who dunit. :) (one thing I do have to say may bother some rea...
See review
see community reviews