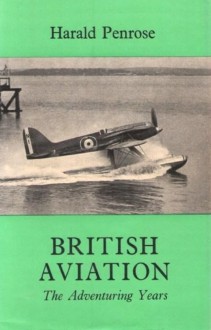 This was when the foundations of air transport were laid and the first great trunk air services were established as part of a world-wide system of communications linking Britain and her Empire, later to become the British Commonwealth of Nations.

The story also covers the pioneer peacekeeping work of the Royal Air Force overseas and its fight for modern equipment.

It was during this time that the structures of British aeroplanes were gradually changed from wood to metal. Although economy dictated the prolonged use of wartime and immediately post-war designs, numerous interesting prototypes were built, an gradually much more advanced aeroplanes entered service - the famous line of Hawker biplanes of the Hart and Fury series emerged, as did the predecessor of the Gauntlet and Gladiator.

The 1920s saw not only the initiation of private flying and gliding but many great pioneering flights including the first between the United Kingdom and South Africa and the first nonstop flight to India. The period was also that in which Cobham made his outstanding surveys of the trunk routes, including his epic flying-boat circuit of Africa.

In the transport field were the Argosy and Hercules three-engined biplanes and the metal-hulled Calcutta flying-boat, which was eventually to lead to the outstanding family of Short flying-boats destined to give great service to British civil and military aviation.

The history of this vital time is described in great detail and brings to life the men, machines and events. The narrative is illustrated by more than 600 photographs and drawings - many not previously seen.
show less
Format: hardcover
ISBN: 9780370100166 (0370100166)
Publish date: 1973
Publisher: Putnam
Pages no: 727
Edition language: English
Category:
History

Wings Across The World: An Illustrated H...

Architect Of Wings: A Biography Of Roy C...

An Ancient Air: A Biography Of John Stri...

No Echo In The Sky - Harald Penrose