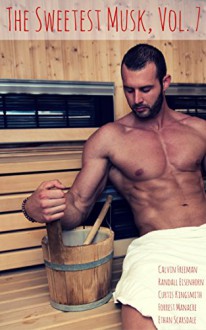 Str8 Till Dark: Crewmates - Laquan is stuck on a work crew building temporary lodgings out in the middle of nowhere. There are no women around, so Laquan and his boss, Merchant, have to take matters into their own hands. When they're no longer surrounded by rednecked white men, Laquan and Merchant engage in hardcore ebony action in the group showers, leading to an outrageous conclusion you'll have to read to believe!

Hardcore Footy Hazing - Damian has just made a terrible fumble that may have lost the game for his footy (Australian-rules football) team, and he's about to be punished for it in the worst way he can imagine! It can't be spoken of here, but it involves tea and also bags, not to mention a certain kind of ball, substantial sweat, muscle and more! This is hardcore hazing, not for the faint of heart!

The Twink, the Thug and One Steamy Prison Shower - Ting knows that, as an Asian gay twink, he's not likely to do very well in prison. Luckily he loves servicing big thugs, and when he discovers that his cellmate is down, Ting goes down on him! His cellmate's name is Thumper, an ex-boxer with a penchant for dominating young men into submission, which is a position Ting is all too happy to be in. When things get tough in the prison shower, Thumper gets rough and Ting shakes his stuff like no one ever has before!

The Workcamp Hairback Jerk in a Circle - Gareth's first day at a remote worksite in the wilderness ends with an outrageous group shower that ends up making him even dirtier than when he started! He and his blue-collar hairbacked redneck studs don't have any girls for miles around, so they have take matters into their own (and each other's) hands!

Ronald Stump the Studly Hunk - Chad needs to decide whether to endorse Ronald Stump, a populist politician running for president. He assumes that means a boring meeting full of wonky policies and cleverly parsed soundbites, only to find that Stump has his own means of persuading potential supporters! His burly dilf body is ready and willing to go to town all over Chad, who can't believe his good luck at landing such an outrageous stud! Will Stump get his endorsement in the end? Or will his caucusing manhood prove unsatisfactory?

Turkish Prison Shower Sex - Reggie thinks his life might be over -- he's about to serve jail time in Turkey, a country known for its ruthless penitentiary life. He's a gay man in a Turkish prison, and his only friend turns out to be a burly English-speaking bear named Kemal! But you won't believe what goes in the long steamy group showers at Turkish prisons. Nothing really counts in the bathhouse, and Reggie is rip-roaring ready to earn his protection the old-fashioned way!
show less
Format: Kindle Edition
ASIN: B01C7IGL5U
Publish date: 2016-02-24
Publisher: The Eroticatorium
Pages no: 102
Edition language: English

Str8 Till Showertime: The Hunkiest Inmat...

Str8 Till College: Spring Break, An Over...