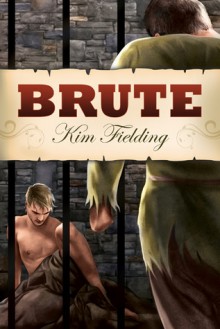 Rumors say the prisoner, Gray Leynham, is a witch and a traitor. What is certain is that he has spent years in misery: blind, chained, and rendered nearly mute by an extreme stutter. And he dreams of people’s deaths—dreams that come true.

As Brute becomes accustomed to palace life and gets to know Gray, he discovers his own worth, first as a friend and a man and then as a lover. But Brute also learns heroes sometimes face difficult choices and that doing what is right can bring danger of its own.
show less
Format: ebook
ISBN: 9781623802271 (162380227X)
ASIN: B00AH8SZL6
Publish date: December 3rd 2012
Publisher: Dreamspinner Press
Pages no: 270
Edition language: English
Category:
Fantasy, Magic, Paranormal, Romance, Sociology, M M Romance, Abuse, Disability

7 years ago
http://Charming2020.booklikes.com Charmingly Euphemistic 2.5 Brute by Kim Fielding
text Brute by Kim Fielding
I read a Cracked article recently about how, as you grow older, it becomes harder to enjoy certain things in movies. Instead of enjoying the car chase you feel feel bad for the people being plowed down. Instead of admiring the loner who picks up and leaves, you think he's a dick for abandoning his ...
See review

7 years ago
http://BrittaNachteule.booklikes.com My Kindle is my TARDIS 5.0 Brute
text Brute
BR with Julie, Marcie, Mel and Paul on January 19th.That's me right now:This book was on my TBR shelf for far too long and I don't know what took me so long to read it.See, I love fairytales! And I love the Middle Ages! Don't believe me? Look at this:(Yes, that was my wedding! Yes, that is my hubby!...
See review

7 years ago
http://AGandyGirl.booklikes.com A Gandy Girl 5.0 Brute
text Brute
Big surprise I know...AUDIOBOOK completed and rated...5 HUGE STARS!!! Just a beautiful accompaniment to this book in every way. Recent article/interview with the amazing K.C. Kelly...http://www.kfieldingwrites.com/ooh-thats-interesting-interview-with-k-c-kelly/“Don't you d-dare say you're ugly or s...
See review

8 years ago
http://Elsbeth66.booklikes.com ~~ Elsbeth ❤❤❤ MM-Romance ~~ 4.0 Brute
text Brute
BR, Monday August 18th with Susan and CarolienI love fairy tales. And especially when it takes place in a medieval setting…..The story reminded me a bit about “The Green Mile”. There was such a sweet giant as well!This giant, named Brute by everyone, hasn’t had an easy life. He’s been ridiculed and ...
See review
see community reviews