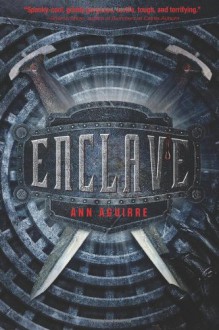 4 years ago
http://lorimurray.booklikes.com Lori's Little House of Reviews. 3.5 Pretty good start to the trilogy!!!!
text Pretty good start to the trilogy!!!!
So I had my son pick 5 books off either my book shelf or the kids and this book was one of his books. I thought it was good for the start of a series. Did it blow me away, no it didn't, did it Suck? No it did not, but it was a interesting book and makes me want to read the next book in the series. ...
See review

5 years ago
http://mikefinn.booklikes.com Mike Finn 1.0 "Enclave" by Ann Aguirre - DNF
text "Enclave" by Ann Aguirre - DNF
This one was just too YA for me. Well written and well conceived but too noisy with teen emotions. This was probably amplified by the "I must emote every sentence at full volume" approach of the audiobook narrator. After 90 minute i decided it was a DNF.
See review

6 years ago
http://RachelGoodbyeBorders.booklikes.com Rachel's books 3.5 Enclave
text Enclave
Man, what a dark, depressing book! So, an apocalyptic event occurs, wiping out life as known. It's a mystery exactly what, until later in the book there are hints to it. Some people were evacuated to a safer area, while the others were left behind to fend for themselves. Some settled in the tunn...
See review

7 years ago
http://readingismyescape.booklikes.com Reading is my ESCAPE from Reality! 4.5 Enclave - review
text Enclave - review
All her life Deuce has lived underground in an enclave called College. She was born during the second holocaust and has never seen the surface. People in the enclave don't live past the age of twenty-five. They are split into three categories, Breeders, Builders & Hunters. Deuce is a huntress. Along...
See review

8 years ago
http://asandwich.booklikes.com asandwich 1.0 Enclave
text Enclave
I was having a discussion recently about the state of female characterisation in fiction, and this book was mentioned. I hadn’t read the book, and I don’t generally read a lot of Young Adult fiction, as it’s not really a genre aimed at middle-aged men, but my interest was piqued enough to give it a ...
See review
see community reviews