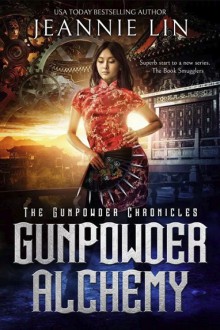 3 years ago
http://Evaine.booklikes.com Evaine's Books, Books and More Books 4.0 Gunpowder Alchemy by Jeannie Lin - My Thoughts
text Gunpowder Alchemy by Jeannie Lin - My Thoughts
This book had been unavailable for a good while (rights reverting to author etc...) but at last it's been republished by the author. And it's good! Worth the wait. :) I'm pretty sure I was guided to this by something one of my fave authors, KJ Charles said on Twitter, so thank you KJ!What we hav...
See review

5 years ago
http://deniz.booklikes.com Closet Geeks and Slow Mo 4.0 My Initial reaction:
text My Initial reaction:
wow! Unique beautiful steampunk novel. Packed with action, interesting character, interesting world building and all wrapped up in beautiful prose. But I can't exactly explain why this isn't 5stars for me.. will ponder upon it. Oh and when is the next book coming out?!
See review
see community reviews