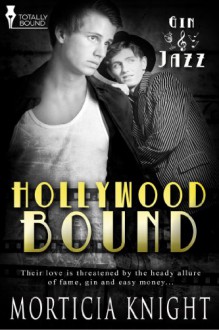 The 1920’s are filled with gin, jazz, and the promise of easy money. When the young and innocent Jack heads to Hollywood with his best friend and lover – he believes that everything will be magical for them. They just need to stick together, no matter what.

The celluloid kingdom demands a hefty price from all who want a piece of the dream. Sacrifices must be made if you want to be a part of the glitz and glamour. Flappers, screen idols and the men behind the star-making machine all conspire to interfere with Jack’s happiness. Along the way, many of Hollywood’s players discover that unfortunately, sometimes dreams do come true.

Book one in the Gin & Jazz series

If you loved The Wolf Gift by Anne Rice and Styxx (Dark-Hunter Novels) by Sherrilyn Kenyon, then you will not be able to put down this absolute treat!

Jack and Nick seek fortune and adventure in the silent film era of Hollywood. But their newly-expressed love is threatened by the heady allure of fame, gin and easy money.

Sweet and innocent nineteen year-old Jack has loved the older and more street wise Nick from almost the first time he met him. Nick has taken care of him ever since Jack arrived in New York after he was beaten and thrown out of the boy's orphanage for messing around with one of the guys there. They share a passion for silent films and have dreams of heading west to make their fortunes building sets for the studios. If only Nick felt the same passion for Jack, and wasn't already engaged to a gal back in Philly.

Nick's temper sometimes gets the best of him, but that's only because he worries about Jack — Nick is all the poor kid has. But he's also terrified about the way he's been feeling towards Jack lately. They're the kinds of feelings he should be having for his fiancé—Penelope—and never for a man. His only goal is to get them both to Hollywood, where he's sure they'll be rolling in the dough in no time, and where everything will all work out the way it should.