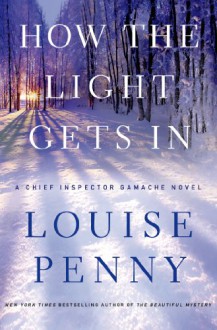 How the Light Gets In
by: Louise Penny (author)

Christmas is approaching, and in Québec it's a time of dazzling snowfalls, bright lights, and gatherings with friends in front of blazing hearths. But shadows are falling on the usually festive season for Chief Inspector Armand Gamache. Most of his best agents have left the Homicide Department, his old friend and lieutenant Jean-Guy Beauvoir hasn't spoken to him in months, and hostile forces are lining up against him. When Gamache receives a message from Myrna Landers that a longtime friend has failed to arrive for Christmas in the village of Three Pines, he welcomes the chance to get away from the city. Mystified by Myrna's reluctance to reveal her friend's name, Gamache soon discovers the missing woman was once one of the most famous people not just in North America, but in the world, and now goes unrecognized by virtually everyone except the mad, brilliant poet Ruth Zardo.

As events come to a head, Gamache is drawn ever deeper into the world of Three Pines. Increasingly, he is not only investigating the disappearance of Myrna's friend but also seeking a safe place for himself and his still-loyal colleagues. Is there peace to be found even in Three Pines, and at what cost to Gamache and the people he holds dear?
show less
Format: hardcover
ISBN: 9780312655471 (0312655479)
Publish date: 2013-08-27
Publisher: Minotaur Books
Pages no: 405
Edition language: English
Category:
Mystery, Mystery Thriller, Canada
Series: Chief Inspector Armand Gamache (#9)

4 years ago
http://oblue.booklikes.com Abandoned by Booklikes 1.0 Done With This Series
text Done With This Series
Well that was a bust. This entire book from beginning to end just felt lazy. I rather Penny had written a one off with Gamache trying to take down the evil doers and we could then get a full fledged mystery next time. Instead we had Gamache and company half assing a murder investigation while Gama...
See review

7 years ago
http://msleighm.booklikes.com msleighm books 5.0
text
5 stars. #9 in the series. I have tried to read all of these in order, that is my preference with any series, book, television, movie, etc. Could this possibly be the final book in the series? I guess I'll just see!
See review
see community reviews