Log in with Facebook
or
Wrong email address or username
Sign up
Already on BookLikes? Log in!
Incorrect verification code
Please, check your email, the code to access your BookLikes blog was sent to you already.
Enter code:
« Back Send
back to top
Search tags: Brodi-Ashton Three authors came together to make this book possible. But, the writing styles were not quite standardized, and led to some flaws.

The premise of this retelling of historical events (with just a touch of storytelling liberties by the narrators), is promising. This is the story of a sixteen-year-old girl who becomes the Queen of England by a series of traitorous events; and how she and her sometimes-horse-of-a-husband (literally) must return the throne to Jane's cousin, Edward.

The tone is tongue in cheek and comes across as a quirky mixture of The Princess Bride and Monty Python's Search for the Holy Grail. It's funny, but at times it comes off as though it's just trying too darn hard. Also, run on sentences and sentences that are not stylistic, but just badly written and not edited (i.e. "Hobbs, Edward remembered the man's name was") made this difficult to read.

However, if you are a fan of YA and don't care a hoot about anything but plot, this is a fun story with numerous instances of deus ex machina to explain any part of the plot that gets cornered.  Of course, this is part of the fun at times. Here's a batch of overdue takes on some good audiobooks. I don't have the time for full-posts, so read the official blurbs if you need more information. Last time I tried one of these, I didn't do such a good job on the "Quick" part, so I'm being more strict with myself this go-around. To that end: the narrators of these do a very capable job with their texts, but I don't have a lot to say about their performance (I'd be happy to listen to other books by them, I should add). 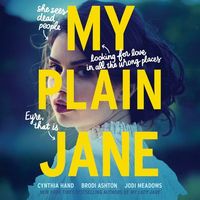 I was really looking forward to this sequel to My Lady Jane, especially because it would involve a supernatural Jane Eyre retelling with a strong comedic sensibility.

It wasn't what I'd hoped it would be, but it was still a lot of fun. The best part of it was having Charlotte Brontë as a character in the story—as Jane's best (living) friend. I enjoyed Charlotte's character enough that I'd willingly read a sequel about her.

And yes, I said, "living" there—Helen, the poor girl from Lowood Institution whose death was so hard for Jane is still around in ghost form. The death was still hard on Jane, but having Helen around as a ghost ended up becoming a different kind of obstacle for her to overcome.

I'd have expected a better link between the Janes—at least a stronger link in the supernatural aspects of the stories—than what we got.

Still, it was a fun listen and I'm definitely coming back for the next installment about Calamity Jane. 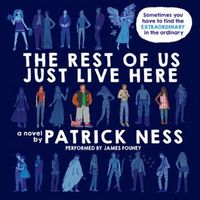 The Rest of Us Just Live Here

I loved the idea of exploring the lives of the "regular kids" in a high school characterized by heroes, legends, slayers, etc. Basically, the kids at Sunnyvale High who know that Buffy is saving their skin on a semi-regular basis who aren't Xander, Willow, Cordelia, etc. While Buffy is fighting vampires and the rest, these kids have family drama, fall in love, get rejected, worry about the future (assuming they don't get eaten by the Monster of the Week) and all the rest. She may be the hero in general, but they're the heroes of their own lives.

So Patrick Ness tells the story of one group of these students on the verge of graduation (while the world is being saved from a threat too complicated to talk about).

Great, great concept. The execution was . . . okay. I enjoyed it, but it didn't leave me dancing in the aisle or anything. This is only my second Ness, but it didn't feel like this was really his wheelhouse—maybe I'm wrong, maybe A Monster Calls is that thing that's out of the norm for him. 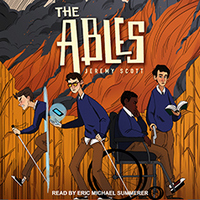 The concept behind this was fantastic—seriously. An upper-MG/younger-YA novel about a Special Education class in a Super Hero High School? Genius. You've got the kid with telekinesis who was born blind, the teleporter who lost his vision in an accident, a wheelchair-bound telepath (okay, that's been done before), a kid with Down Syndrome who has the genetic markers for superpowers, but no one's sure what they are, and so on. These students come together and learn how to work together and become the heroes they dream of being.

This was a blast—think early-Percy Jackson kind of quality. Some solid emotional moments, real character growth, great action. There was one gut-punch of a surprise that I still can't believe that Scott had the nerve to make—and two big reveals that sealed the deal for me (one that I saw coming for miles, but he executed well enough that I don't care; and one that I should've seen coming, but didn't).

This one will be enjoyed by readers of all ages, I expect. Recommended.

I enjoyed listening to this book, but I do have to say that I enjoyed My Lady Jane more. I wasn't laughing as much as I did with the first book, but I did enjoy it.
I wasn't a big fan of Jane Eyre the book, so I really liked the spin this story took and the character which were in the book.
Like Reblog Comment

I enjoyed listening to this book, but I do have to say that I enjoyed My Lady Jane more. I wasn't laughing as much as I did with the first book, but I did enjoy it.
I wasn't a big fan of Jane Eyre the book, so I really liked the spin this story took and the character which were in the book.
More posts
Your Dashboard view:
All Reviews Text Photo Quote Video URL Activities
Liked posts Top Tags
Press About Terms of Services Privacy Policy Contact Us Blog FAQ Patronaty medialne BookLikes for Authors Partners panel more...
Team Themes Docs API Blogs
Copyright © 2022 BookLikes