Log in with Facebook
or
Wrong email address or username
Sign up
Already on BookLikes? Log in!
Incorrect verification code
Please, check your email, the code to access your BookLikes blog was sent to you already.
Enter code:
« Back Send
back to top
Search tags: Crooked-House 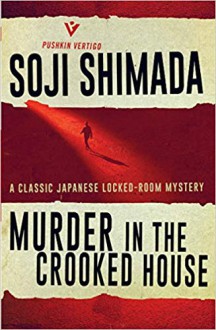 Kozaburo Hamamoto, a rich businessman, invites several guests to stay at the Ice Floe Mansion, his eccentric creation, during the Christmas of 1983. The mansion consists of a main building with a confusing layout and very slightly sloping floors, as well as a tower modeled after the Leaning Tower of Pisa. Kozaburo's room is at the very top of the tower, reachable by a drawbridge. A couple of his family members, his staff, and his guests are all in various rooms in the main house.

Things are a little awkward and tense right from the start. Eiko, Kozaburo's daughter, flubs a few of the introductions: she completely forgets Ueda, Mr. Kikuoka's chauffeur, and manages to embarrass both Kumi Aikura (Mr. Kikuoka's "secretary," who everyone knows is also his mistress) and Hatsue Kanai (the wife of Michio Kanai, an executive at Mr. Kikuoka's company). Among the guests are also two rivals for Eiko's hand in marriage, Shun Sasaki and Masaki Togai. After one of the guests is murdered in a locked room, the police begin investigating. As in The Tokyo Zodiac Murders, readers are invited to follow the clues, look at various crime scene and building illustrations, and potentially solve the mystery themselves.

This took me ages to read, because I kept flipping back to earlier parts of the book to reread them. There were so many strange little crime scene details and architectural oddities that I felt like I could somehow manage to solve the mystery if I just thought about it carefully enough. In some ways it seemed more solvable than The Tokyo Zodiac Murders. Even with hints from another reader, I couldn't quite get there, though, and now that I've read the end and know what really happened, I'm not sure I'd ever have figured it out. I spent too much time focusing on the wrong details. Also, as clever as the solution turned out to be, the way Shimada opted to muddy the water irked me.

I didn't feel like it fit the character, and even the character couldn't really satisfactorily explain why they'd done that particular thing, since it was technically unnecessary.

Although I enjoyed getting to see Kiyoshi Mitarai again, when he finally appeared in the last third of the book, overall this is the kind of story you read more for the puzzle than for the characters. Even with all of the just-under-the-surface drama, most of the characters didn't make much of an impression on me, and for a while I kept having to flip back to the character list to remind myself who everyone was. Of the bunch, Eiko, Kumi, and Mr. Kikuoka probably stood out the most. The cops, meanwhile, completely blended together.

Shimada's Kiyoshi Mitarai books are like the literary equivalent of the puzzle games I like to play, right down to that moment of frustration when I give up and look at the solution, because clearly I'm not going to manage to figure it out on my own. I see on Wikipedia that there are many more books in this series that could potentially be translated into English one day. Even though I didn't quite enjoy Murder in the Crooked House as much as The Tokyo Zodiac Murders (the latter had a better overall atmosphere), I still very much hope that I eventually get the chance to read the next book in this series.

Right, I'm finished. Uhh...the explanation was interesting and made use of a detail I noticed but then just sort of passed by because I was too focused on the individual crime scenes. And also because....well, Shimada didn't quite cheat, but the first part of the whole thing still feels kind of like cheating.

Overall, it was good, but I like The Tokyo Zodiac Murders more. Here's hoping there will be more English translations of Shimada's works in the future.

"Challenge to the reader: The clues are all there. Can you solve this case?"

Shimada did this exact same thing in The Tokyo Zodiac Murders. It was just as aggravating then. I did end up reading Tigus's hints, and I'm still stumped. My current theory is something something,

tilted floors, some sort of shift happens somehow that causes the victims to unconsciously overbalance and...fall on knives? That are somehow there, with freaking pieces of string I haven't figured out? But tilted floors becoming level would require some kind of mechanism, and there isn't one. I keep thinking back to the flowerbed, though. If I'm right about that one, it doesn't need a mechanism to straighten out, just proper placement and a building that's basically a mirror, so maybe something is temporarily messing with victims' perceptions of the floors.

I have to go to work in a bit, so I get the whole workday to think about this, and then I'll finish the book up and find out the truth.

Kiyoshi Mitarai is finally here and says he knows how the murder was done, because ugh of course he does. Meanwhile, the best thing I've got is a theory I can't completely make work. I think it's still better than the cops'

theory, though. That was just stupid.

The only thing I feel relatively sure about right now is the solution to the mystery of the shape and location of the flowerbed. As far as everything else goes, who knows. I have to laugh at the idea of a guy as wealthy as Kozaburo Hamamoto

just shrugging after his architect ordered the wrong size metal floorboards, though. So he's probably lying, and the gap is likely deliberate and an important part of the murder mystery.