Log in with Facebook
or
Wrong email address or username
Sign up
Already on BookLikes? Log in!
Incorrect verification code
Please, check your email, the code to access your BookLikes blog was sent to you already.
Enter code:
« Back Send
back to top
Search tags: Jaid-Black Not to my taste.

Tale the first features a h and her bestie getting caught up in the mists of time and finding themselves in Scotland long before indoor plumbing was invented. Add to that, the convenience of the H and his band of merry men being on a rieving mission to steal his would-be bride (steal her and marry her in some random priest's hut as opposed to a formal arrangement between families. Gotcha). I mean, I suppose it wasn't bad, but it's hard for me to get past the 0-60 aspects of it. But then there was that position where we're beat over the head with the fact that her buttocks and labia are skyward (that's what it said. :shrug: )

Tale the third is an alien abduction, with the H being a dragooni or something like that. The h spends several days in an induced sleep while getting "prepared" for mating while she's awake. The impression I got was that the H (and with this sort of thing as a norm, I'm using that term v. loosely) was boinking her while she was drugged out of her mind. Then expected her to be all warm and fuzzy about things when she woke up. Frankly I would have been out for blood. Also, this is a menage. Anthology Average is 3 stars out of 5

1. Wolf’s Law by Cheyenne McCray. Okay story about a werewolf coming upon a woman sold into slavery and falling in love/lust. 3 stars.

2. Scarlet Sweet by Anya Bast. The fae separate to separate planets and find themselves in dire straights. One has the potential to be "embraced" which makes her something more and maybe finding someone more. Good story. 3 stars.

3. Writers Unblocked by Diana Hunter. A couple who have been married for two years finally come clean about what floats their boat. 3 stars.

3. Looking Forward by Mary Wine. Colonists come to a planet and one of the women becomes an unwanted widow until the planet's inhabitants get a look at her. Good story. 3-1/2 stars.

4. Raptor's Prey by Delilah Devlin. He's part of a dream but he's not. They have sex in these dreams but she's not sure if it's real because he ended one talk with a really cryptic remark. And what's up with the hawk? 2-1/2 stars.

5. Voyeurs Overexposed by Sherri L. King. People living under Earth's crust fight evil and try to stop humans from finding out. One of the Shikar meets a photographer who took pictures of a battle. Why they sent this girl, I have no idea. Okay story. 3 stars. If anyone knows of a group following this posts suggestion to

"…Since lawyers are expensive, it would probably be a lot more cost effective for a group of authors with similar issues/contracts, to band together and pool their resources, in order to get the best advice possible under the circumstances…"

please give a shout out in case of interest to additional authors.

Ugh.  Why should authors have to waive royalties as #4 of this image says (other than of course a desire to just get it over with) including recent and new sales from vendors thru January 2017 that EC will still be receiving despite the closing announcements?

Why can't Ellora's Cave just blanket revert all author's rights back to them and voluntarily cancel all contracts?  If not still trying to profit off their books, why doesn't EC themselves do that plus remove all their books from all vendors now that they are just closing?  If planning on filing a bankruptcy, why not say that? 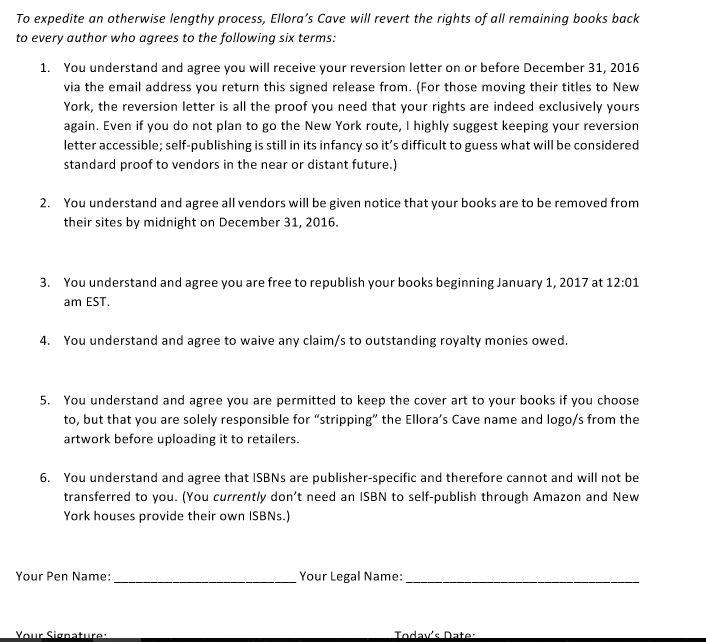