Log in with Facebook
or
Wrong email address or username
Sign up
Already on BookLikes? Log in!
Incorrect verification code
Please, check your email, the code to access your BookLikes blog was sent to you already.
Enter code:
« Back Send
back to top
Search tags: LOL-Funny Grandpa Mudcake wants a haircut, but Grandma Mudcake says she is too old to give him one, so he has to go out and get a haircut. Grandpa refuses and his hair grows and grows. Finally, he cannot take it anymore, so he goes to find a barber. He tells Bazil the Barber want he wants but Bazil does not speak English very well and Grandpa falls asleep. What a haircut he gets! But is it what he wanted? What happens when Grandpa wakes up?

I enjoyed this story. It makes me want to read more of the series. Grandpa is a grump and Grandma does not seem to be any different. I loved his haircut. I also liked that Grandpa wanted the lollipop at the end of the haircut. This is a perfect book for your early readers. They can laugh over Grandpa's haircut and style. I liked that little known animals were shown as belonging to the mammal group.  There are also well-known mammals.  I liked how where they lived was given along with what they ate.  Then facts were given that maybe I knew but mostly were new to me.  I appreciated when I was told when an animal was extinct in the wild but still alive due to protected areas/captivity.  While I am not happy about the captivity, I am glad the animal (I'll let you learn which one it is) is not totally extinct.  I learned a whole lot about these mammals and in a delightful way.  Perfect for your 4-8 year old.

The popular social media website known as Twitter has lots of uses, however possibly one of its most popular usages is for the generation of funny Memes. There are essentially hundreds of millions of possible funny Memes that were produced throughout the year.

Yet first, what is an amusing frog? It's a prominent web anime that was produced by Charlie Poole in 2020. He created this popular webcomic with the assistance of his close friend Patrick Starck. The funny frog was one of the initial politically inaccurate internet animations to be created and also spread out online. It's always amusing to satirize somebody in a frog outfit, which is why many people use them to waste time on Twitter.

You could wonder exactly how these funny images make it to the top of Twitter checklists, after that. Well, one of the biggest factors why they are so prominent is probably because they capture the interest of a great deal of people very swiftly.

There are all sorts of various kinds of amusing Memes drifting about on Twitter today. Some of them are most likely extra prominent than others. You'll discover those amusing pictures that make people stop in their tracks as well as go, "wow, that's truly amusing". These are a few of the most prominent of all. They can be located on all type of different topics, including pets, stars, and also almost anything else you can think of.

Frog pictures are most likely several of the most preferred of all funny things on the site. As well as not only are frogs popular yet they are amusing in lots of various ways. As an example, did you understand that frogs have an extended feeling of life? When they become angry, they don't generally wriggle around by themselves for too long, however when they are mad they will often make their way to the top of Twitter lists trying to obtain everyone to mob them?

The popular angry frog image is funny in great deals of various ways, yet it's additionally a great example of how you can use wit to make on your own popular. And funny becomes prominent really rapidly!

Funny Internet Memes are anywhere online. You'll discover great deals of funny locations to publish your favorite ones, and also even funny web pages that you could have never ever gone to. People enjoy to use funny Internet Memes since they're enjoyable and they maintain individuals interested. funny offensive memes If you most likely to a site and read among those funny Internet Memes, possibilities are you will not just erase it out of embarassment. You could actually read it once again just so that you can see if the following funny Internet Message is much better than the last one.

Web funny stuff is all over the location, whether it's the most recent celeb gossip a silly net poem, or amusing frog photos. There are great deals of various sort of amusing jokes around that you may intend to have a look at. Several of them may even make you laugh so hard that you'll sob splits of giggling! You can likewise try your hand at making your very own amusing Internet Message.

The popular social media site known as Twitter has numerous uses, yet maybe one of its most prominent usages is for the generation of amusing Memes. You'll discover those amusing images that make people quit https://en.search.wordpress.com/?src=organic&q=funny in their tracks and go, "wow, that's truly funny". The popular mad frog photo is funny in great deals of different means, but it's also an excellent example of just how you can use humor to make on your own prominent. You'll find whole lots of amusing places to publish your favored ones, and also also funny websites that you could have never gone to. Web amusing stuff is all over the place, whether it's the latest celebrity chatter a ridiculous internet rhyme, or amusing frog photos.

Life is filled with challenges. May individuals who have actually figured out that they have this condition are recognizing it yet once more during the coming year as the latest coronavirus spreads much more rapidly than formerly believed. This is a great time to acquire a couple of funny memes regarding life dilemmas! This might be just what the doctor bought.

This is definitely a great time to get a couple of relatable Memes regarding life challenges. If you are taking care of a diagnosis of a possibly harmful disease, you have no doubt noticed just how quickly the information travels. A regional medical facility in your dark memes town might simply have actually issued an advising about an infection episode. A newspaper someplace in the nation might have a story regarding an episode that's brushing up the country. And on the internet continues to freak out regarding the current disaster.

Did you know that you http://edition.cnn.com/search/?text=funny can make use of amusing memes regarding life battles to make sense of it all? It assists you identify with others that are going via similar points.

Among the most significant worries about the recent flu epidemic that's sweeping across the United States as well as various other countries is how it will influence our culture. We've listened to a lot about the threat of the swine flu, particularly in children. But suppose you were a child that contracted it? What would certainly life be like for that child now? There's plenty of great product available on how to handle such a circumstance if it were to happen in your life as well. 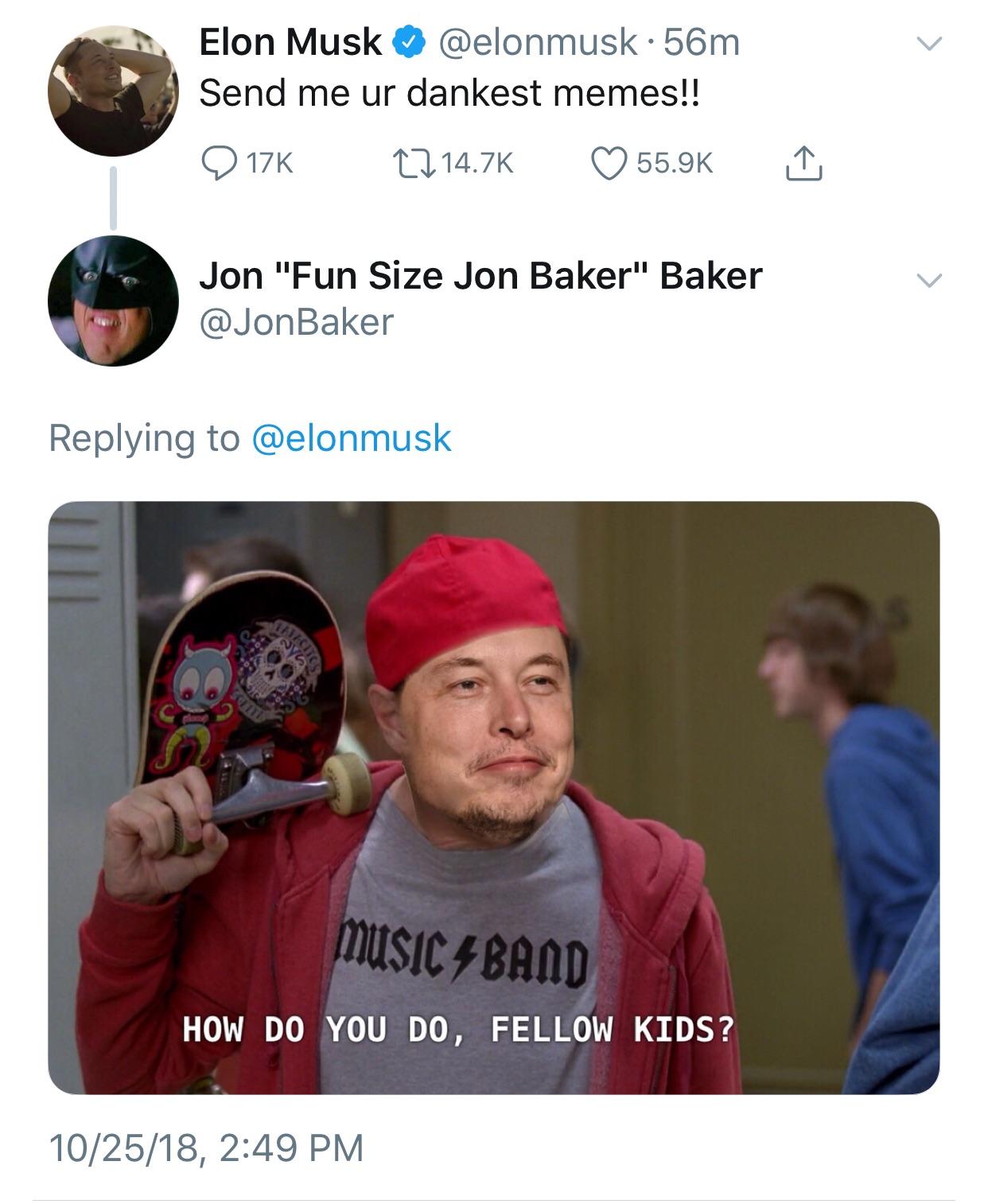 Have you seen a picture of a deranged person online? You recognize - the ones that shout "I'm so crazy I can eliminate somebody?" These funny images multiply throughout social media websites. And they are flawlessly suitable, since they reveal the daily side of several of the worst humans in the world. It's amazing, really.

These aren't the only funny things on the net. Look around. You'll locate that a great many tweets and also retweets come from individuals that are discussing real life situations. As well as funny as it could seem, a great deal of them are depressing. Occasionally they're amusing, yet commonly their sensations go beyond that.

Occasionally points go wrong. As well as sad things do win out in the end.

Take this funny image circulating on Twitter. Can you visualize what the internet would be like if this kind of point didn't exist?

It's a tweet uploaded by a female named @thereallilacina. Lilacina is a vacationer as well as social media addict. She uses Twitter to share her experiences around the globe, including the one she simply shared with the individual in the picture. It just claims that she was in a dreadful scenario, yet one that, because she chose to stay favorable despite every little thing, finished well.

The funny component of this story isn't so much the situation itself. As far as Twitter goes, this is the whole bundle: funny, fascinating and social.

As you can see, the funny aspect of life is an amusing way of looking at points. Due to the fact that of the net, we're able to see things that typically would not cross our minds.

Did you understand that you can utilize amusing memes about life has a hard time to make sense of it all? These aren't the only funny points on the web. The funny part of this tale isn't so much the circumstance itself. As far as Twitter goes, this is the whole plan: funny, fascinating and also social. As you can see, the amusing element of life is an amusing method of looking at things.