Log in with Facebook
or
Wrong email address or username
Sign up
Already on BookLikes? Log in!
Incorrect verification code
Please, check your email, the code to access your BookLikes blog was sent to you already.
Enter code:
« Back Send
back to top
Search tags: Patrick-Ness 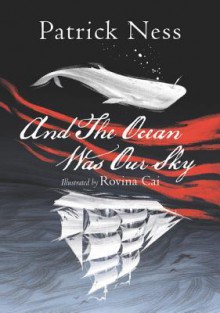 I have literally no clue what I just read. I can tell you it involves an upside down world of whales, a prophecy, a renamed Moby Dick and a lot of confusion. However I cannot make sense of it.

There's whales that can speak to humans, that can harvest humans for food even though they don't have hands, whales that have their own ships and weapons but no real explanation for the how.

I know this story is supposed to be somewhat nonsensical but whatever point it was trying to make missed me completely.

I picked this book up while browsing through the teen section in a library I'd never been to before early last year. I read 47 pages of right there. It pulled me in like none of the other books I'd tried did. Starting with the description of a death by drowning will do that. We're not even told why he's in the water to begin with, he's just there drowning and we have to go with it.

That was one thing that was clever but also frustrating about the book. How things are revealed. There's lots of surprises throughout the story, some of them a bit predictable, but more often unexpected. I never knew how Seth &co. would resolve it all.

However, the number of times the author has Seth stop suddenly and start running somewhere for some reason he won't tell the reader becomes kind of annoying. He could easily insert a few words of explanation but instead has to draw out the suspense by cutting off the sentence with em dashes, or having characters put off discussing a topic until later.

I liked the use of present tense, and thought it was a good choice for the narrative. It made the impact of the story much more immediate. I also liked Regine's mantra, "Know yourself and go in swinging." It's a good mindset.