Log in with Facebook
or
Wrong email address or username
Sign up
Already on BookLikes? Log in!
Incorrect verification code
Please, check your email, the code to access your BookLikes blog was sent to you already.
Enter code:
« Back Send
back to top
Search tags: Providence Oh, this book. How on earth does one review such a unique book without ruining the experience for others? This is one of those books that you should experience going in nearly cold.

Strangely enough this book takes place in a town five minutes from my home. Me, being me, was reading every Nashua reference with a squinty eye looking for a nit to pick but I didn’t find anything to bitch about. Nashua is not a very exciting place, if you ask me, and it was fun imagining this weird stuff happening so close to me. I’m going to give any suspicious men about town even more of a wide berth after reading this, however.

If you bought PROVIDENCE because you loved YOU and HIDDEN BODIES and you expect another crazy Joe you do need to know that this book is not at all like either of them. It starts out when the main characters are children and within pages I was so in love with their friendship and engaged with these two characters that I didn’t want to put it down (curse you real life and your constant interruptions). Kepnes managed to do in mere pages what some books cannot accomplish after hundreds of them. She made me care deeply about these two and put my feelings through the wringer. Now that’s a talent!

Jon and Chloe just click. They would’ve, could’ve, should’ve been that rare couple who fall in love, marry young and stay together through good times and bad because they were meant to be. But that doesn’t happen because who wants to read that book?! Something unexpected happens to one of the kids and it changes them forever. Waking up with vague memories and a copy of The Dunwich Horror by Lovecraft with a strange letter tucked inside, the parents, best friend and the family soon learn that something has forever changed with this kid. I’m not going to tell you what it is or even which kid it is because you need to experience that gut punch yourownselves. I’ll just leave you guessing with this quote.

"I’m starting to get paranoid, starting to think something’s wrong with me… I imagine myself the invisible monster, slaughtering them all."

The remainder of the book features these two kids grown and struggling to connect, longing for each other but unable (for reasons I’m still not divulging) to be together properly. Their story is absolutely wrenching to witness. There is also another character named Eggs who makes it his mission to crack a case involving suspicious deaths of young people. Eggs and his story was also filled with pain and heartbreak and tore me all up inside. Geez, this book. I’m going to spoil it if I keep blathering on. Just read it if you want and I hope you love it as much as I did.

My favorite quote is this one because it’s so damned accurate for me and most everyone I know that I actually laughed out loud like a genuine lunatic.

"Why are you so dressed up? That should be the state fucking slogan of New Hampshire. " 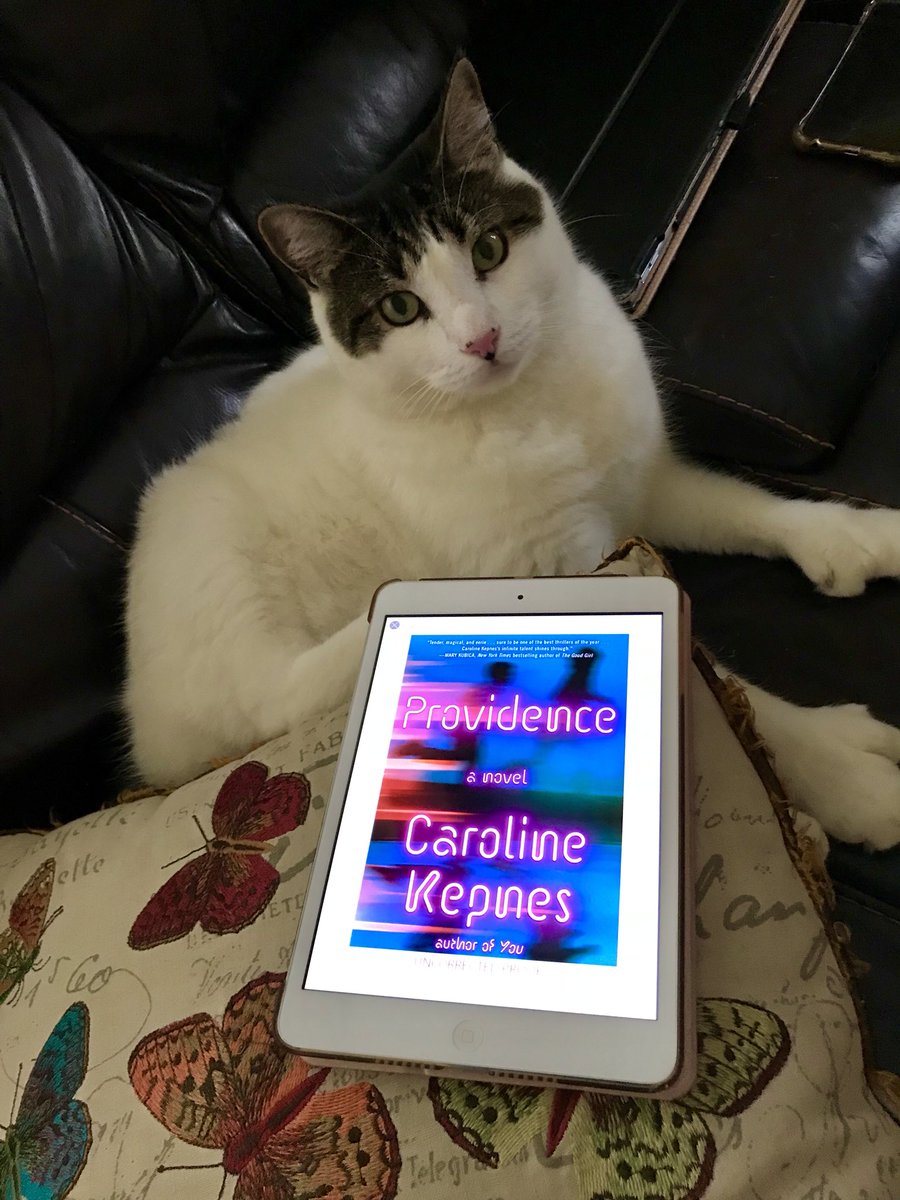 #Fridayreads is here! This week has been crap for reading time but I hope to make up for that this weekend. #AmReading PROVIDENCE by @CarolineKepnes, starting THE SEA WAS A FAIR MASTER BY @CalvinDemmer & listening to THE HORROR SHOW @thehorrorshowBK. Happy reading/listening! pic.twitter.com/sN6CHS0iZB

Let me start by saying that the author clearly has talent. Providence is well-written and the character development is good. My feelings are based solely on my enjoyment, or lack thereof, of the story itself. Actually, it's two stories, loosely connected until they finally merge together in the latter part of the book. The parallel storylines do make sense once it all comes together and both are easy enough to keep up with.

Caroline Kepnes was new to me, so I went into this one without any expectations or comparisons. The book is listed in the mystery/thriller genre and the blurb sounded intriguing, so I dove in. And then I dove back out - several times. Either I completely missed it or it just wasn't there, but I found absolutely nothing in the book that mysterious or thrilling. The only mystery for me was what happened to Jon while he was kidnapped. What did Roger Blair do to him? No spoiler here, we're told who the kidnapper is from the time it happens. We also know that whatever he did to Jon caused some major changes. Changes that have dire consequences. But, we're never given the details. So, I suppose that aspect is more an unanswered question than a mystery.

All of that, while relevant to my feelings about the book, still isn't what clinched it for me. As I said, I didn't find anything that would make me think this story is a thriller. What I did find is one of the most depressing stories that I've read in some time. We have Jon, who is forced into a lonely existence because of the effects he has on those around him. Effects which cause no small amount of guilt. Then we have Chloe, who can't let go of her feelings for Jon and attempts to move on with a manipulative jerk. And let's not forget Eggs and Lo. We only get Lo's story through Eggs, and while that info leads me to believe she's a bit of an optimist, his view on everything is anything but. I won't go into details, but my opinion of him was clouded almost from the time he comes into the story. Not by his gut instinct that the deaths of so many people must be connected, but by his personal life and how he deals with it. What it boils down to is from the time Jon is kidnapped to the last page, I just felt bogged down and sad. Sad for these characters and their circumstances.

It should be mentioned that there is a good deal of reference to Lovecraft and his work throughout the story, especially one book in particular. Quite possibly, if I were more familiar with Lovecraft's work, I may have had different feelings, but I'm not and I didn't.

Jon and Chloe are young, they're best friends. And when Jon finally decides to tell Chloe the feelings he has for her, he's kidnapped on his way to school by an old substitute teacher who is obsessed with H.P. Lovecraft and has a plot to save humanity. Thoughts of Jon are never far away, but Chloe tries her best to fit in with the popular crowd and keep her life moving forward. But all that comes to an end when Jon escapes. He discovers he has an uncontrollable power that endangers anyone he has intense feelings for. He stays away from Chloe, for her own good. He struggles to find the answers he's looking for that will bring him and Chloe together like they should be. But he's also being tracked by a detective who is fascinated by a series of killings that he thinks are connected.

Unpopular opinion here and it pains me to say this, but I did not like this book at all. The big clue for me in the blurb should have been "an uncontrollable power that endangers.." and I ignored it. After that part of the story came into play my interest immediately faded. The book did start off great - two young friends at that awkward age are dancing around the feelings they have for one another then the boy is kidnapped and everyone who cares about him is thrown into turmoil. But as time went on I realized I didn't love these characters, I didn't like them nor did I hate them. I just didn't care about them. I didn't connect with any of them and I didn't get any depth from them. It was a boring story, full of nothing. I felt like I was reading forever and only made it to 52% before I skipped (it wasn't even worth a skim through) right to the epilogue which was just as boring and unsatisfying as everything that came before it.

Thank you to Netgalley and Random House Publishing Group for an ARC in exchange for an honest review.

Caroline Kepnes has one of the most unique voices in modern fiction, and by this point I will buy anything of hers on day one. No questions asked. She’s that good, folks. When the opportunity arose for me to read and review her new novel, Providence, some four months before release date, I jumped at the chance. And here we are.

The first fifty or so pages of this book is some of Kepnes’s finest writing to date. The reader is introduced to Jon and Chloe, best friends in junior high, and they immediately jumped off the page. Kepnes’s first two novels didn’t really feature kids, so it’s here she shows she can write them just as well as adults.

And then . . . we go forward in time, after some crazy circumstances tear these friends apart. The reader is introduced to Egg and Lo, a married couple; we also get to see other characters as they develop through the years. It’s all still very good — Kepnes really can’t write badly — but I must admit I felt a little deflated after the excellent opening chapters. Don’t get me wrong; I enjoyed this read through and through. It is a crime thriller of the highest order: likable characters and copious Lovecraft references make this a highly enjoyable read. I just felt there was a bit too much pining on the part of a couple of the leads. I don’t want to go into spoiler territory here, but at times I just felt this novel wasn’t living up to its potential. Kepnes has created a neat concept and doesn’t really utilize it much, and when she does it feels rushed.

Don’t get me wrong: I loved this book. It is beautifully written and shows this author is able to stretch her wings and try new things. Fans of her previous releases will find much to love about this.