Log in with Facebook
or
Wrong email address or username
Sign up
Already on BookLikes? Log in!
Incorrect verification code
Please, check your email, the code to access your BookLikes blog was sent to you already.
Enter code:
« Back Send
back to top
Search tags: Robot-loving 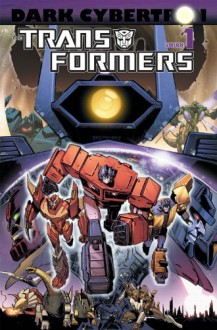 I keep thinking I'd love to see Jessica's face while she's reading this.   This is the first in the epic crossover between More Than Meets the Eye and Robots in Disguise.   Quite frankly, it does Barber a disservice, because when his writing is next to Roberts' scripts...

Oh, Barber's a fine writer.   The problem is that Roberts is top of the line.   Putting anyone other than his equal next to him?   Well, it would do most of the human race a disservice.   That being said, this blends fairly well.   Not perfectly, but fairly well.   And the real aspects that awe me as a reader are the breadth and scope of this: it truly is an epic.   Spirituality, history, religion, politics, mythology?   All of these get tackled, and they're simply some of the overarching themes that come to mind first for me.   This is simply a story too large to be contained in one volume; it would be diminished by brevity.

It's not drawn out, but given the time it needs to tell this particular story, a story that has been hinted at, quite frankly, before Roberts even touched this franchise.  I doubt Furman realized this would be going quite this far when he spoke of Shockwave's ores, but it did.   I do not doubt that Roberts read those stories and came up with his own sprawling backstory, and future.  I wouldn't be surprised if he had been working on this since before he got this gig.

Another thing that is beautiful is how well this comes together.   This took some planning, and it makes Barber's empurata/shadowplay gaff more perplexing: surely Barber and Roberts had been talking about how to orchestrate this, something they did flawlessly.   I would have thought Roberts would have kindly pointed out that Barber had made a mistake.   I say kindly because it would have been a kindness to tell him that, because otherwise someone like me notices and goes, seriously?   Really?

It also makes me suspect that Roberts is the one to have truly pulled this off, because Roberts seems to be more detailed oriented.   Oh, Barber can seed stories, but Roberts does so more consistently, more subtly and quite frankly, more effectively.   Why?   He seems to be more detailed oriented, and that little mixup of Barber's is part of why I believe this to be so.

And I feel a little sad saying this.  I don't want to put down Barber.   I repeat: he's a fine storyteller.   He just isn't quite as clever or detail oriented as Roberts.   He doesn't have that fine touch, he hasn't shown me he can walk those fine lines that Roberts can.   And because of this, I feel as if this whole thing has Roberts' fingerprints on it, like he sort of led Barber around, said, 'yup, this is how we do it,' and then let Barber write the RiD scenes.    I feel sad because Barber was kind of put into this position where it's clear who the puppet master is.

Then I remember how brilliant Roberts is, and how much I love him.   So I'm not that sad. Another non-review of a reread. 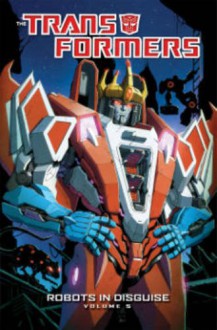 And while everything is building up, it's the last issue in particular that impresses me.   Oh, poor, poor Soundwave!   I'd forgotten the details of Soundwave's past, how he came to be who he was later on, and I found it touching.   In particular, the bond between him and Ravage - and Buzzsaw and Laserbeak - but in really between Soundwave and Ravage.

Short non-review of a reread. 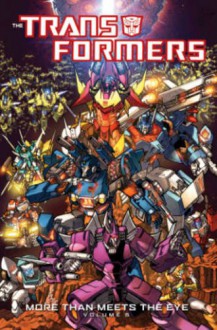 Because, yes this is still happening.   We have eight volumes to go through of both series, not counting the Dark Cybertron volumes.   (So really ten.)

What can I say?  After reading this twice, I keep thinking it won't be the emotional rollercoaster it was the first time.  It is.   Every time.   There's a couple panels where I keep going 'NO!' out loud.   Each time, guys, each time I read this.

Add to that the excellent prose post-script at the end, and this a lovely, self-contained five part story plus a one-shot after that.   It's everything I hoped for, and it's everything its predecessors were: sharp, bitingly funny, smart.

I don't care, Jessica.   I'm moving onto RiD five.   This  is the problem with buddy reading these with me.   It's either we move fast, or I take February off to buddy read Star.   We can't let Pamela Anderson win...

And I need to clean.  I blew off cleaning for coloring yesterday, so, yeah...

Ugh.   Well, wish me luck.   I'll probably give myself a break in four or five hours.   Get myself some food and read for like a half hour, then back to it! 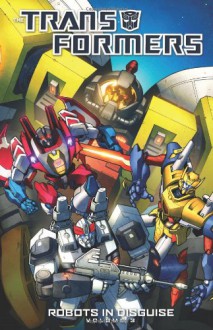 Just in case anyone's forgotten, this is a buddy read with Jessica.

I'd forgotten about how intricate Prowl's plans were, but knowing what I know now?   It's absolutely more chilling.

The interplay between Prowl, Bumblebee, and Starscream is sublime.  So is the thin line that everyone walks, unsure of how reliable their peace really is.   This is a paranoid-soaked title, and I love it.

Although  I think Arcee is my favorite right now. 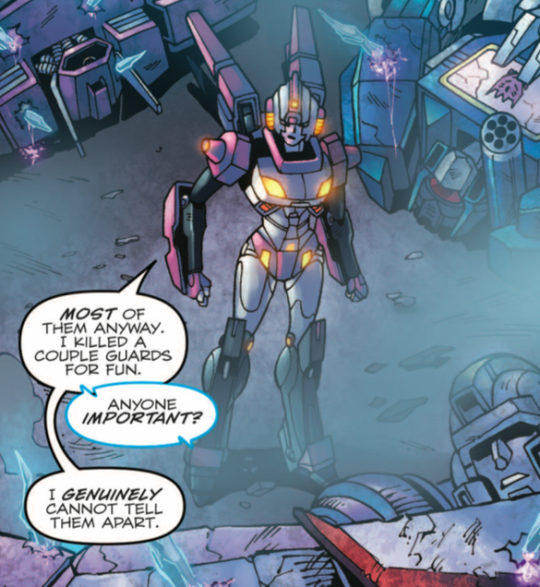