Log in with Facebook
or
Wrong email address or username
Sign up
Already on BookLikes? Log in!
Incorrect verification code
Please, check your email, the code to access your BookLikes blog was sent to you already.
Enter code:
« Back Send
back to top
Search tags: baghdad-buddy-read 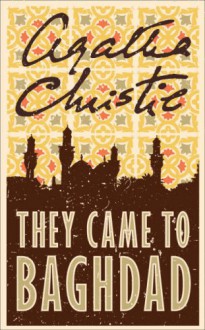 I actually finished this a few days ago, but haven't yet reviewed it because I somehow managed to schedule the buddy read during my trip to Disneyland. I don't know what I was thinking.

Anyway, I went into this book prepared for a repeat of my Passenger to Frankfurt experience. Imagine my surprise when it was more of an Anne Beddingfield crossed with Emily Trefusis experience. I loved Victoria Jones, even if she did make the preposterous mistake of crossing continents for a man that she'd just met. She amused me greatly, and I loved the part where she broke herself out of captivity after being kidnapped. I'm a great fan of women saving themselves - not so much a fan of men saving women.

The story was even somewhat believable for the first 50%, and had a delightfully campy feel to it. I do feel like Agatha always tries to go too big in her spy thrillers - it's always an attempt to take over the world, instead of just something small, like trying to assassinate a secret agent, or get some government secrets handed off to Russia. She goes so small with her murders - so many of them are just the narrowest of family homicides, where the motive is something of middling value, or a small slight, that her spy thrillers are jarring. I just can't take them seriously, so when they are obviously not meant to be taken seriously, they work for me. As opposed to the ones that are seemingly serious, which just come off as strained and sort of embarrassing.

I've really enjoyed reading the updates of my fellow readers! I agree with Lillelara that Christie may have been drunk while she wrote this. It was also definitely written before she lost her sense of humor and became the "Get Off My Lawn" Christie of her later books. And I loved reading BrokenTune's comparisons with Ian Fleming's James Bond.

Now that I've read this, I am even more excited for the proposed adaptation. It could be great fun! Let it be great fun, please.....

A reminder about the buddy read planned for next week! The drinking and reading commences on 6/24/18!

And, on another note, a new Agatha Christie television adaptation has been announced - They Came To Baghdad! Link to article.