Log in with Facebook
or
Wrong email address or username
Sign up
Already on BookLikes? Log in!
Incorrect verification code
Please, check your email, the code to access your BookLikes blog was sent to you already.
Enter code:
« Back Send
back to top
Search tags: city-of-glass-book-review 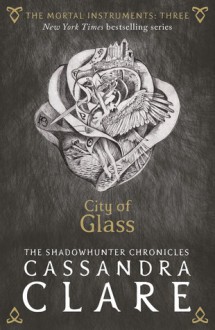 “I am a man" he told her, "and men do not consume pink beverages. Get thee gone woman, and bring me something brown.”

The struggle has been real when it comes to this series, I've made no qualms about sharing my feelings in regards to the first two books. I was left feeling pretty underwhelmed and frustrated to the point of screaming at the characters. But something happened, maybe Clare took a writing class, maybe she went to the crossroads and sold her soul to the devil. Whatever she did, it worked.

This feels so grown up, so wildly different I can't put into my words the joy I felt reading this. I did spent most of it waiting for something to go wrong, but it didn't. This was a solid read, but to me this book is what the first two should have been. If I could throw all logic out the window, this would be a 5 out of 5, but this is the third book and by now I should have been all kinds of invested.

This book and it's characters feels so different, I finally stopped hating Jace...well mostly. I still have problems with his attitude, yes I understand he's putting on a front but behind closed doors he shows little in the way of remorse for his actions and his stubbornness, so it's hard to emphasise with him. Simon finally gets the respect he deserves and gets chapters from his POV, which I'm hoping will lead to Isabelle and Alec getting a chance to steal the spotlight in the final three books.

Of course it's not all sunshine and rainbow pooping unicorns. Clary is still a huge problem, she's rash, acts before thinking and is forever making dumb decisions after another. I understand her goal is to save her mum and help stop Valentine but she never looks at the bigger picture, there are so many consequences to her actions. She's a teenager acting like a kid and it's not for me, fingers crossed she'll stop charging off leaving others to pick up the pieces and fix her mess.

All in all, I'm glad I've stuck with it. City of Glass finally brought it, and it's given me hope for finishing this series. I am however going to take a break from The Mortal instruments and read her prequel series The Infernal Devices next as I need a break from these characters.