Log in with Facebook
or
Wrong email address or username
Sign up
Already on BookLikes? Log in!
Incorrect verification code
Please, check your email, the code to access your BookLikes blog was sent to you already.
Enter code:
« Back Send
back to top
Search tags: crazy-women This book promises a “gripping and chilling debut psychological thriller”. It is gripping but it isn’t any of the other things. If you know that going in and you love reading about horrible people as much as I do, you’ll likely enjoy it much more. I requested it so long ago that I didn’t remember a thing about the blurb until I just went back and read it now and I’m glad of that!

Laura’s life is one of wealth and privilege but her marriage is devoid of warmth and love. She’s focused all of her love on her grown son Daniel. He loves his mom and seems to be a decent son, despite her smothering, but when a new girlfriend enters the picture Laura quickly decides that Cherry is nothing but a pretty, little gold-digger and she does not like her.

The first half or so of this book is an intense character study of Cherry and Laura. We get to know them, their motives, their desires, their vicious inner thoughts and their incredible flaws. You can see a true mess in the making and it so much fun to read. As things progress, you realize just how far these two women will go to have things go their way. They are both deviously awful humans. One is smothering, selfish, mean-spirited, and more than a little evil. The other is shallow, materialistic, vindictive, and totally evil. Horrid, terrible people and I loved reading about them.

Even though there are really no true surprises here and not a lot happens in the first half, the book is incredibly infectious. Once I started reading I just had to keep going to find out what nasty thing was going to be said and done next. When a whopper of a lie is told by one of the women, the book spirals into a pit of doom from that point thereafter and I read it straight through until the end.

I received a copy of this book from Netgalley but it was only the first 13 chapters. Why would they do that to anyone?! I ended up getting my copy from my local library but had to wait a few months before my number was called. 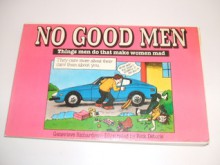 This wonderful though almost unknown book, which I have read so many times that my copy is falling to pieces, consists of a series of about 90 cartoons, one per page, illustrating all the things men do that women can't stand. I honestly can't recall a single woman I've shown it to who hasn't appreciated it. Most of them immediately read it cover to cover, nodding every couple of pages as they recognize another thing their partner does. "Oh yes, he does that... and that... and that... Not THAT though. I think. No, wait, he did it once." If the partner is present, he is well advised to stand alongside and plead for mercy before things get unpleasant.

Of course, you have to see the pictures to get the full effect, but maybe giving a description or two will persuade you to go out and buy it. Caption: "They Flirt With Waitresses". This is the first one. HE is leering at the rather tacky-looking waitress, and saying "Dessert? Honey, just looking at you is dessert enough for me!" WAITRESS is smiling appreciatively and saying "Well, ain't you the charmer!" SHE is looking desperately away, rolling her eyes heavenwards and trying to throw up.

Or, here's another one. Caption: "They Always Want Sex". SHE, wearing a plaid skirt and sensible blouse, has clearly been interrupted while brushing her teeth (she still has the toothbrush sticking out of her mouth). She is being chased around the bed by HIM, tongue hanging out and wearing nothing except a manic grin. This is immediately followed on the next page by "They Never Want Sex": SHE, wearing her sexiest negligee with a rose held between her teeth, is standing by the edge of the bed and looking suggestively at HIM, very geeky with glasses and book, who is peering up at her and saying defensively "Aw... didn't we do it last month?".

So as you can see, it's actually a little more even-handed than it might first appear. Other favorites include "They Love Having You See Pictures Of Their Ex-Girlfriends"; "They Don't Know How To Pay Compliments"; "They Care More About Their Cars Than They Do About You"; and (for some reason I often get this one quoted to me, can't understand why) "They Only Hear The Things They Want To Hear".

There are only 83 shopping days left before Christmas, and I honestly can't believe you don't know anyone who would appreciate this as a present. You probably know at least five such people.

Rose, thank you for getting me to post some pictures! Originals at

On the cover of the book:

Caption: They care more about their cars than they do about you.

As she lies comatose on the ground, eyes rolled up in their sockets and tongue hanging out, HE's saying "Oh my God, you didn't scratch it, did you!?!"

And here are three more: 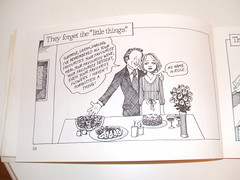 Caption: They forget the "little things".

And SHE, for some reason less than ecstatic, replies: 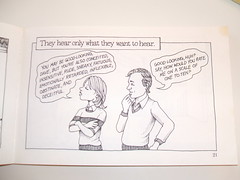 Caption: They hear only what they want to hear.

SHE says: "You may be good-looking, Dave, but you're also conceited, insensitive, rude, sneaky, fatuous, emotionally retarded, inflexible, obstinate, and deceitful."

HE says: "Good-looking, huh? Say, how would you rate me on a score of one to ten?" 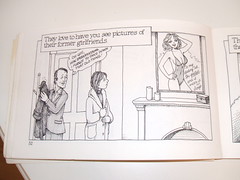 Caption: They love to have you see pictures of their former girlfriends.

HE says: "Oh, gee, how embarrassing, I forgot to take down that old thing!"

SHE is apparently lost for words.