Log in with Facebook
or
Wrong email address or username
Sign up
Already on BookLikes? Log in!
Incorrect verification code
Please, check your email, the code to access your BookLikes blog was sent to you already.
Enter code:
« Back Send
back to top
Search tags: crownofmidnight 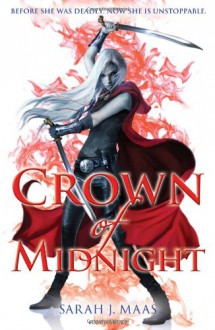 This was my first Free Friday read and I got 6$ for it, yay!

This is my second time reading this book and I liked it as much as the first time. There were so many details I forgot, I'm so happy I re-read it. In this book, there are way more hints about how Celaena really is and I don't understand how I did not get it the first time reading it. It seems obivous now (well, of course, I know the answer so it helps...).

Celaena has some annoying reactions but she is in pain so that is understandable. We get to know her a bit more but we still don't have a lot of information about her past. Her relationship with Dorian is evolving and I love what they are sharing, I know it will get even better later on so I'm excited. I still don't ship Celaena and Chaol, like at all.

So many details about the Witches as well and I need to read Heir of Fire now! The witches storyline is one of my favourite in the entire series. I can't wait for Celaena and Manon to meet...

Crowned by Evil.
Bound by Duty.
Divided by Love.

Celaena Sardothien, royal assassin, is the King of Adarlan's deadliest weapon. She must win her freedom through his enemies' blood - but she cannot bear to kill for the crown. And every death Celaena fakes, every lie she tells, put those she loves at risk.

Torn between her two protectors - a captain and a prince - and battling a dark force far greater than the king, Celaena must decide what she will fight for: her liberty, her heart or the fate of a kingdom...

I sadly did not enjoy the second instalment as much as the first. Yes there were a few parts that I liked, but overall I found it to be boring and predictable. A few of the reviews I saw were shocked by the ending. Really? It was so obvious I knew it from book one.

The first half of the book was interesting and I basically could not put it down, getting to see Celaena's life as the Kings assassin was exciting. Unfortunately as soon as part two started (after something tragic happened), I was bored out of my mind. Not only did I not care for these characters any more, I found Calaena's decisions to be childish and stupid.

I also don't understand why in the synopsis they mention that she is torn between two guys. Not once did I feel she was having trouble picking which guy to absolutely fall in love with. To be honest, it was both Chaol and Dorian who kept thinking about her in that sense, actually that's all they talked about. She has bigger fish to fry than worrying about which guy to pick.

This might only be me though, but I definitely didn't get that love triangle vibe. Not in book one and definitely not in book two.

Now don't get me wrong, I don't hate this book. There were a few things I loved about this, like the writing style. I find Sarah J. Maas books easy to read and captivating at times. It's hard to write a fantasy world, you're basically starting a world from scratch and creating whatever you want without seeming over the top.