Log in with Facebook
or
Wrong email address or username
Sign up
Already on BookLikes? Log in!
Incorrect verification code
Please, check your email, the code to access your BookLikes blog was sent to you already.
Enter code:
« Back Send
back to top
Search tags: dead-royals It's just boring. It's hard to believe that it's possible to make the diamond necklace affair boring, but this author manages it. The book opens with two characters having a conversation about things they both know already, but discuss again for the reader's benefit. Then very little plot happens, then massive amounts of info dump (this time not even with as-you-know conversations, just plain 'let me tell you about all the things you need to know to understand this book which I couldn't be bothered to include in a more subtle way'), a bit more plot, a lot more info dump.
Halfway through the book Marie Antoinette has refused the necklace and Jeanne has persuaded Rohan to buy it and that's it. The rest was the author letting us know what she knows and people talking. To be fair some of that was about the current situation in France and the author trying to make the connection between that, the affair and the upcoming revolution but when it's presented in a way that makes me skip whole pages because the writing is so dull that really doesn't help.

And it's somewhat annoying that the author doesn't seem to like any of the characters...

(Fyi: this is a re-release of a book from the 20s, something that isn't exactly advertised and also nothing you'd suspect after looking at that 'oh my anachronistic dress histo-romance'-cover - that's not the one in the BL-database but this one).

I picked that up without realizing that it's a re-release of a book from the 1920s so I was thrown off by the casual antisemitism in the description of a character...

Apart from that the book is als very very wordy and full of infodumps and people having 'as you know'-conversations. 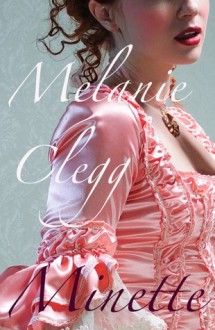 Born in the very heart of the dangers of the English Civil War, smuggled out of the clutches of Parliament as a toddler and then raised in near penury in exile in France, the charming and beautiful Princess Henrietta-Anne Stuart, youngest daughter of Charles I and Henrietta Maria is the original Cinderella, waiting breathlessly and with some trepidation for the moment when her family’s fortunes will be restored and she can reclaim her proper place in the world.

A treat for all fans of The Secret Diary of a Princess by the same author, Minette leads the reader into the flamboyant, exciting and treacherous world of Louis XIV's Paris and Charles II's raucous Restoration court as seen through the eyes of an enchanting and unforgettable heroine.

I simply think that I'd be more interested in reading a really biography about Minette than a fictionalized version of her life. These things can work but this book covers her life between the age of 11 and 17 and that results in two problems:

1) It's also a First Person POV and her voice doesn't sound like a eleven year old at all. I still hugely preferred that over the author trying to imitate a first person-narration of a young child (which honestly would have been annoying to me no matter if she managed to get it right or failed at it) but I still did a double-take the first time I read how old she was because what? Eleven? Seriously?

2) Nothing much happened to Minette during that time. OK that is perhaps the wrong thing to say. She still had a much more exiting life than any eleven year olds who aren't the daughters of an executed king and who life in exile but she still can't do much. Because she is so young (and because her mother is...a complicated character). So this book is her going to balls, her reacting to news about what her siblings are doing, more balls and some romance. Now I don't mind any of these things but I generally prefer less balls and more of the other.

Minette simply had almost no own agency which is logical and understandable considering the circumstances but for me that was still rather frustrating to read.

A second book about the rest of Minette's life is planned and since I like the author and from what I read Minette's life will become really interesting then* I will probably still read it.

*it's not even that the six years described in this book were boring. Just, as said, a biography might have been better since it could have put all the events in a bigger context. 9% in is rather early for me to DNF something but I realised something:

There are so many better things to do than reading about the redemption-arc of a male character that is offset by him witnessing the rape of a female character. Let us start of with two rapes (off-page thankfully) because why not?

Also a noblewoman was introduced. I am not sure if she is based on a real person but I really hope she is. Because if she isn't the author would have made up a character and called her Maud.

In a story about the English Anarchy. Which was a fight for the throne between King Stephen and Empress Maud. A fight in which Stephen's wife, who was called - surprise - Maud also played an important role.

(Also Stephen had a daughter named Maud I think...and there were possibly 34436 other vaguely important people called Maud in this conflict).