Log in with Facebook
or
Wrong email address or username
Sign up
Already on BookLikes? Log in!
Incorrect verification code
Please, check your email, the code to access your BookLikes blog was sent to you already.
Enter code:
« Back Send
back to top
Search tags: dead-wake 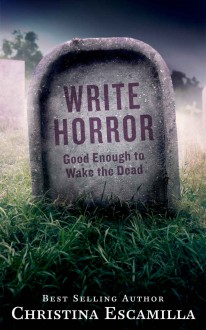 Christina Escamilla writes great horror. If you haven’t encountered it before “64 Deaths” is a superlative read.

I was looking forward to this short guide book and read it with enthusiasm. However, my two main problems with it are that it is poorly edited, some sentences simply do not make any sense, and the lack of quoted examples. Escamilla does use examples to illustrate her points but because she can only comment on rather than reproducing the cited work, it loses its power. I understand that permission to quote current works might be difficult and expensive to obtain, but then why not use out of copyright horror and her own work to quote?

Apart from these two niggles there are some gems of good advice and I am sure it would be very useful to someone starting out. Certainly the publishing section is something I’m likely to refer back to. In summary it isn’t written for established writers, but it’s likely to be of use to new writers planning to write horror. 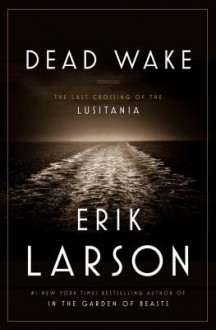 I loved this book. It grabbed my attention immediately and filled in some gaps in my understating of the events leading to the American entrance to the war. Larson has once again proven his standing as one of the leading non-fiction writers in this decade.

The way Larson wove the passenger’s personal lives into the larger war environment was compelling and enjoyable. I loved the chapters he wrote from the perspective of German submarine captains and crew, humanizing them in a way that no other book I have read has had the courage to do. And while some non-fiction writers bog their stories in details, Larson provides a perfect amount of information so that readers still learn something without feeling like they are reading a textbook.

I didn’t want this book to end.

Today I'm going to tell you about Deep Wake: The Last Crossing of the Lusitania aka reason #5022 why I will never go on a cruise. I have an odd fascination with shipwrecks but also a deep, crushing fear of them. I cannot deal with images of sunken ships, statues, or really anything submerged under the water and nestled at the bottom of the ocean floor (you can also substitute ocean with sea, lake, or deep pool). Here is also where I confess that I am woefully ignorant about World War I. I always struggle to remember who was fighting in the war and what it was really about (I think this is still being puzzled over in some places). As far as the Lusitania, the only thing I knew was that it was a large passenger ship that had sunk (filling me with terror like the sinking of the Titanic and the film Poseidon with Kurt Russell). So I went into this book pretty much as a blank slate and by 30 pages in I was already spouting facts about it to my coworkers (who may never go on a cruise either). Like with all of Larson's works, he focuses on a major topic while interweaving storylines that occur parallel to the main event. For example, this book is about the Lusitania and its final voyage but in order to put that into context Larson had to discuss WWI and President Woodrow Wilson's state of mind in regards to the neutrality of the United States in that war (Wilson was one passionate dude, ya'll.). So not only did I learn about the machinations of the leading world powers of the early 20th century (Germany, Great Britain, and the U.S.A.) but I also got a glimpse into President Wilson's personal life, learned how submarines operate, and discovered that people really liked to smoke in 1915.

PS As mentioned in other posts, I love reading the end notes of nonfiction books because there are always fantastic little tidbits there that just didn't fit in the overall narrative of the book. Dead Wake was no exception. It led me to The Lusitania Resource which is a website dedicated to uncovering all of the facts of the sinking of the ship including primary documents, articles concerning the controversy of its significance to WWI, and much more. I highly recommend you check it out if nothing else than to whet your appetite for Larson's book. (Yes, I know that it's insane for me to be obsessed with this site after referencing my very real fears of traveling on a cruise ship but I like to have all of my facts ready for those trying to change my mind. It's perfectly normal.)