Log in with Facebook
or
Wrong email address or username
Sign up
Already on BookLikes? Log in!
Incorrect verification code
Please, check your email, the code to access your BookLikes blog was sent to you already.
Enter code:
« Back Send
back to top
Search tags: destinys-captive 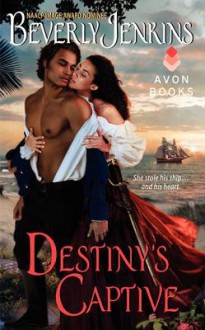 Having some issues posting to Booklikes, will post there when I get a chance.

So "Destiny's Captive" is the third and last book in the Destiny series. I have to say that the main reason why I didn't give this five stars is that I thought that Jenkins didn't do a great job with exploring the whole PTSD story-line. I know that this was of course written in consideration of the times of the day, but I thought everyone was acting way too much like [redacted] should just get over things. We get a glimpse into what happened and it's shocking and heart-breaking so I thought that everyone could have been more sympathetic. That said, I loved the love story between Noah and Pilar. The two of them worked well together. I also have to say that once again Jenkins does a good job of tying things into the time that the book was written. We get some ugly looks at segregation in this one with the two characters having to ride a train and being forced to segregate because they are not white. We also see how women even if they are capable, would not be able to run a business like the daughter of one of Noah's potential business partners wants to.

"Destiny's Captive" follows the Noah Yates. We have heard and seen glimpses of him in the first two books, but not much. We know that he is gone a lot and that his family misses him. We also heard in the first two books how he was kidnapped (or crimped) and forced to work aboard a ship before his family found him. Noah feels adrift and knows that he is not the same person he was before this happened and his family feels pained that he keeps them at a distance now. When Noah's ship is stolen though by a female pirate (Pilar), he promises to find her and get his ship back. When Pilar is almost captured she and her family make their way to her uncle in Florida. Pilar is wondering what is next for her when in walks the man whose ship she stole!

I thought that Jenkins does a great job of setting up Pilar and Noah. I do think as some other reviewers noted there's a bit too much going on in this one. And though I liked how Pilar and Noah eventually get together, I wish that we had more interactions with the brothers and sister in laws in this one since this was the last book. I thought the writing was really good and I did enjoy the romance scenes between Pilar and Noah. The flow worked for the most part until we got towards the end.

The setting of this book seems even more brutal than the previous books in this series. Jenkins includes the practice of crimping or shanghaiing in this one and we get to read what was done to Noah and others. I read up on crimping or shanghaiing and was shocked it took to the 1900s before the practice was outlawed. We also get to read a bit about Cuba's efforts to liberate due to Pilar's backstory.

The ending I think wrapped things up too quickly. We go from Noah being hurt to all of a sudden a secret being revealed and no one really getting a chance to deal with things. I also didn't like the fact that everyone acted as if [redacted] was in the wrong.