Log in with Facebook
or
Wrong email address or username
Sign up
Already on BookLikes? Log in!
Incorrect verification code
Please, check your email, the code to access your BookLikes blog was sent to you already.
Enter code:
« Back Send
back to top
Search tags: diverse-book-tag-superheroes 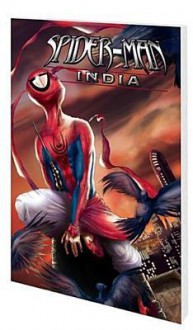 This was an amazing comic! I loved the way the feeling of Spider-Man stayed the same and I loved all the details that were changed. For those who live and die by canon, this isn't a good idea to read but for the rest of us who enjoy having familiar stories retold or reimagined and given new perspectives, this is a must read!

Well, if you like superheroes and comics. I checked all the other reviews I could find of this comic in an effort to find out how well the changes played with Indian audiences, but I couldn't find anything. Goodreads had a non-Indian who studies Hindu and Indian cultures that said it was well done, but that was the best I got. That said, I loved it and was annoyed by most of the negative reviews.

It's not that people aren't entitled to not enjoy a book that I like, but most of the negative reviews reminded me of the negative reviews of Cinder. It's a retelling/reimagining based on a single big difference that changes some elements of the way the story progresses. Don't go into a book or comic knowing that it's a retelling and then be upset that it was essentially the same story. You knew it was the same going in! Now, for the people who thought the story was weak or something, I just respectfully disagree.

Nevertheless, I do enjoy reimagining the possibilities. One of the negative reviewers I saw on Amazon went on about "why not just move -" and continued listing other heroes to move to other countries and I loved just thinking about it, even though he (or she or ze or they, the tag didn't indicate gender) meant in a bad way. I think it's a great idea to imagine our heroes in other countries. For one, it points out that hero stories are universal, two it showcases culture  differences in positive ways, three it lets us vicariously visit other countries. Why not?

I did understand some issues that people had with the dialogue. It wasn't quite as witty as we're used to, but that was the only criticism I could really agree with. I wish I knew enough about Indian heritage and all the supernatural/spiritual things mentioned to safely speak on it but I don't. At the same time, the comic is rewritten by an Indian artist, so I think it's safe to say that he melded the story with his own culture in a way that is not offensive or insensitive to his own culture. At least, I hope so.

Meera Jain and Flash were so much better than the originals! The spiritual and supernatural elements, especially with the shift in where everyone got their powers was a lot of fun. It gave me that tingle like the first time I heard the Spider-Man origin way back in the day. I liked the new costume. I loved the two-paged spreads every time they happened. They changed enough for me to feel like the story was refreshed but not so much that it was a difference story. I even liked the choice at the end and the way he handles it all. 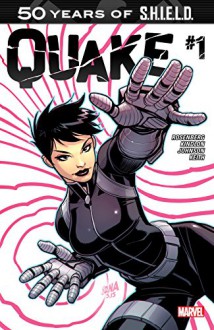 As a fan of the show, I thought it was great to see Quake get the audition to upgrade and the respect from Cap. It really showcased the ever-changing nature of the Avengers team, and the way it’s more like a rotating watch so no single hero gets all burned out.