Log in with Facebook
or
Wrong email address or username
Sign up
Already on BookLikes? Log in!
Incorrect verification code
Please, check your email, the code to access your BookLikes blog was sent to you already.
Enter code:
« Back Send
back to top
Search tags: favorite-author-and-narrtor 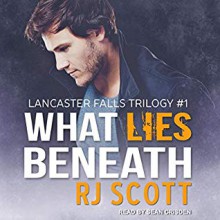 in RJ Scott’s ‘Lancaster Falls’ series is of course the small town of Lancaster Falls and as is often the case with small towns it is rife with interesting characters each one having their own secrets leaving the reader to wonder who are you? How much do you really know? And how are you involved? Small towns you’ve gotta’ love ‘em!

When Sawyer Wiseman left Lancaster Falls to become a police officer in the big city of Chicago returning home broken and battered wasn’t a part of the plan but we all know life is what happens when you’re busy making other plans and that’s what happened to Sawyer. So now he finds himself back in the town he grew up in working for the Sheriff’s Department with a boss whose actions are often questionable at best telling him to go out to the Dwyer cabin and check on the person who’s taken up residence in it.

Sawyer expects to find an elderly recluse not Chris Lassiter a hot young author of horror stories whos struggling with writer’s block who’s more than a little bit interested in the sexy, small town deputy sheriff standing on his doorstep. Now all Chris needs to do is convince Sawyer that what he thinks is a bad idea could actually turn out to be the best thing that’s ever happened to either one of them.

Even when Sawyer begins to acknowledge that he’s interested in seeing where things can go between them it becomes a bigger challenge than either man has anticipated with the demands of Sawyer’s job rapidly increasing, as well the pressure on Chris to produce the next bestselling book in his popular horror series is increasing as his time to meet this deadline runs out.

Sawyer and Chris both quickly realize that in spite of the fact, that circumstances should be pulling them apart they seem to be turning to each other with increasing frequency.

I was absolutely crazy for this story when I read the e-book…even if I did get left looking over the edge of a cliff. Still when the opportunity was presented to listen to the story on audio I jumped on it especially when I learned that Sean Crisden was the narrator. Mr. Crisden is one of my absolute favorite narrators. I know when I get a book narrated by him that even if I’m not totally enchanted with the story I’m not going to have an issue with the narration no, in fact I can rest assured that even the worst of stories will become tolerable and as was the case here a story that I already knew I loved just became a whole lot better and more enjoyable.

While I have by no means read every book written by this author, I can honestly say it’s not from lack of desire or willing to do so…sadly, sometimes real life just doesn’t always let us do things as quickly as we’d like to, but for me this one has a bit more of a darker undertone to it than what we usually see from Ms Scott, but I can also say that for as much as I’ve loved her other books that I’ve read, this is definitely one of my favorites and I honestly can’t wait to continue with this series and learn what’s going to happen next.

An audiobook of  “What Lies Beneath” was graciously provided by the author in exchange for an honest review.