Log in with Facebook
or
Wrong email address or username
Sign up
Already on BookLikes? Log in!
Incorrect verification code
Please, check your email, the code to access your BookLikes blog was sent to you already.
Enter code:
« Back Send
back to top
Search tags: flag 1. Alaric the Goth by Marcel Brion. Biography that reads like a great Barbarian story.

2. Under the Black Flag by David Cordingly. Real pirates!

3. Morning of the Magicians by Jacques Bergier, Louis Pauwels - history of magical practice

4. The Secret History of Ancient Egypt by Herbie Brennan

5. History of the Goths by Herwig Wolfram

6. Beneath the Pyramid by Christian Jacq

7. The Advance Man: A Journey Into the World of the Circus by Jamie F. MacVicar

8. Original Magic: The Rituals and Initiations of the Persian Magi by Stephen Flowers

9. The Triumph of the Moon by Ronald Hutton

10. A Brief History of Chocolate by Steve Berry, Phil Norman While the author accurately captured the voices of the teenagers in this book, with their struggles and figuring out who they are, I thought that the amount of issues piled within were a bit much.

Liam, our protagonist, is a junior in a small town high school, the punter on the school's football team, and gay. He knows he's gay, and he's okay with that, but there's no way he can let on about that, because his parents drag him to church on Sundays, and all he's ever heard from the pulpit of the local Baptist church is that homosexuality is sin.

I felt sorry for him after just a few pages, empathizing with him about the impossibly situation he's in.

Enter Cody, new student, in town temporarily due to his father's job, who becomes the new star player on the football team. Also, he's gay too.

I liked the story well so far, and looked forward to how Liam and Cody would navigate the rough waters ahead.

I thought that the depiction of the relationship, first love, the inability to keep their hands off each other even in risky places, the jealousy Liam feels at Cody's pretend-GF (who doesn't know she's a beard) were all well done, but I didn't think that the self-harm issue was handled with sufficient depth.

While Liam's parents, especially his mother, were supportive at the eventual reveal that their son is gay, I also felt that the climax and subsequent ending weren't handled with enough depth either. I would have liked to see some closure to what happened, and I would have liked to see an epilogue of sorts that showed how Liam and Cody fare after the main part of the story ended.

I did like the inclusion of the Wiccan beliefs and how it was juxtaposed to the Christian conservative beliefs to which Liam's parents subscribed. The jarring differences between Cody's parents and Liam's parents were also well done, if somewhat one-dimensional.

I would recommend that this book carry trigger warnings, especially since it's geared toward young adults, considering the self-harm issue it discusses within. Yes, the cutting is mentioned in the blurb, but I felt that the dangers of cutting were not sufficiently explained, nor did I believe that Liam, once repeatedly flooded with those endorphins, would so easily be able to stop cutting.

While the issues raised within were realistic, they weren't fully resolved to my satisfaction. YMMV. Overall, a good effort. This was my first book by this author.

I received this book for free though LibraryThing’s Early Reviewers program in exchange for an honest review.

The internal debate within the United States about how the country should act around the world, to either avoid or intervene in foreign entanglements, has been going on for over a century.  However, neither the arguments nor the situations that bring them on have changed over that time.  Stephen Kinzer in his book The True Flag looks at when this debate began back at the turn of the 20th Century when the United States looked beyond the Americas in the “Age of Imperialism”.

The political and military history before, during, and after the Spanish-American War both inside and outside the United States was Kinzer’s focus throughout the book.  Within this framework, Kinzer introduced organizations and individuals that opposed the actions and outcomes promoted by those more familiar to history, namely Theodore Roosevelt, as the United States was transformed into a “colonial” power.  Yet, while this book is about the beginning of a century long debate it is more the story of those who through 1898 and 1901 argued against and tried to prevent the decisions and actions that today we read as history.

Although the names of Roosevelt and Mark Twain catch the eye on the cover, in reality Kinzer’s focus was on other important figures on either side of the debate.  The biggest promoter of “expansionist” policy was Henry Cabot Lodge, Roosevelt’s long-time friend, who gladly let his friend become figure that history would remember.  However, Lodge’s fellow senator from Massachusetts, George Frisbie Hoar was one of the fiercest opponents and critics of the “expansionist” policy that Lodge and Roosevelt promoted.  One of the enigmatic figures of the time was newspaper tycoon William Randolph Hearst, who openly advocated and supported war in Cuba but then turned against the expansion when the United States fought the insurrection in the Philippines.  Businessman Andrew Carnegie was one of many prominent individuals who founded the American Anti-Imperialist League to work against the United States ruling foreign territory.  Amongst those working with Carnegie were former President Grover Cleveland and imminent labor leader, Samuel Gompers, but the strangest bedfellow was William Jennings Bryan.  In Bryan, many believed they had the person in the political sphere that could stem the tide against the “expansionist” agenda but were twice stunned by the decisions he made when it was time to make a stand.

Kinzer throughout the book would follow the exploits and opinions of both Roosevelt and Twain during the period covered, however there was is a stark difference amount of coverage each has in which Roosevelt is in the clear majority.  It wasn’t that Kinzer chose not to invest page space to Twain, it was that he did not have the material to do so.  Throughout most of the period covered, 1898-1901, Twain was in Europe and out of the social and political landscape of the United States.  However, once Twain stepped back onto U.S. soil his pen became a weapon in the cause against imperialism that Kinzer documents very well.  Unfortunately for both the reader and Kinzer, Twain only becomes prominent in the last third of the book whereas Roosevelt’s presence is throughout.  This imbalance of page space between the books’ two important figures was created because of marketing, but do not let it create a false impression of favoritism by Kinzer on one side or another.

History records that those opposed to the United States’ overseas expansion lost, however ever since the arguments they used have been a part of the foreign policy debate that has influenced history ever since.  The True Flag gives the reader a look into events and arguments that have shaped the debate around the question “How should the United States act in the world?” since it began almost 120 years ago.  This book is a fantastic general history of an era and political atmosphere that impacts us still today, and is a quick easy read for those interested in the topic. 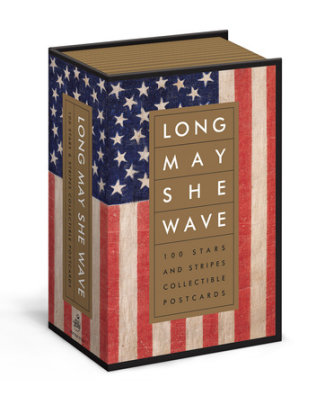 This isn't an actual book. It's a book shaped box full of postcards.

From one of the world's leading graphic designers comes a stunning tribute to America's most enduring icon-the Stars and Stripes.The Revolutionary Congress resolved in 1777 that "the flag of the United States be 13 stripes, alternate red and white, that the Union be 13 white stars in a blue field representing a new constellation." Since that time, the American flag has been raised high in wartime triumph and peacetime celebration; burned in fervent protest; sewn lovingly onto quilts, caps, pillows, and bags; appropriated by the commercial sphere to sell goods as varied as cigars, and designer clothing, and rock-and-roll albums; and faithfully honored every 4th of July to celebrate America's independence. This collection of more than 3,000 Stars and Stripes artifacts ranges from Civil War-era banners and Native American braided moccasins to an early 20th-century "friendship" kimono and original flag art by several of the world's leading designers. In its deluxe format with over 500 illustrations, LONG MAY SHE WAVE gives wide berth to the flag in all its manifestations, and the result is a stunning visual history of America'¬?s most treasured symbol.Full-color throughout, with over 500 illustrations in a deluxe 11 x 14-inch volume-LONG MAY SHE WAVE is the perfect gift for folk-art appreciators, history buffs, and collectors.Features the 3,000-piece exhibit that was displayed at the American Institute of Graphic Arts and the San Jose Museum of Art in 2000. From toy soldiers to collectable spoons, cigar blankets to historic flags—the breadth of the collection is unrivaled.

I really, really like this. There are two of each postcard. This is the perfect gift for history buffs and/or book lovers. The box is just big enough to fit the postcards and slides nicely into my book case. The postcards are of nice quality. I had a blast looking at all of the designs. I will be purchasing more of these for my father and father-in-law for Christmas. They both very much like mine.

I recieved a copy of this from Blogging For Books in exchange for an honest review. I think that learning about the American Flag is really important. This is a simple book that explains this holiday and then the students could draw their own flag of an imaginary country and what that flag would look like. Then they could write a story to go along with their imaginary country. I am all about students going beyond and out of the box in their writing. I would use this with a 1st - 3rd grade class.