Log in with Facebook
or
Wrong email address or username
Sign up
Already on BookLikes? Log in!
Incorrect verification code
Please, check your email, the code to access your BookLikes blog was sent to you already.
Enter code:
« Back Send
back to top
Search tags: introversion 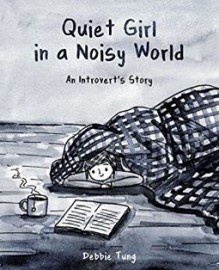 Debbie Tung is an introvert, although she didn't always know that. At the beginning of this graphic novel, when she was still in grad school, she figured she was just weird. As she meets the person she'll eventually marry, finishes grad school, and deals with her first job and a work environment that seems to do nothing but drain her, she gradually figures herself out and becomes more comfortable with and less apologetic about her introversion.

This was a quick and largely relatable read. Her "what it's like to be an introvert" and "books make me happy" comics seemed really familiar, so I'm guessing I've probably seen Tung's comics shared on Booklikes and elsewhere.

I was a little surprised at how long it took Tung to figure out that she was an introvert. That said, I can't remember exactly when I found out about introverts and realized I was one - I feel like I've always known, or at least there was no "eureka" moment for me like there was for Tung. I could understand her relief at finally having a word for what she was, however. While not everyone is fond of labels, they can be a nice way for people who feel they're "weird" to learn that they're not alone.

There were a bunch of book- and introversion-related comics in this volume that I loved. I also thought it was sweet how well Tung and her extrovert husband seemed to mesh. The only parts that didn't work quite so well for me were the comics related to job hunting and job quitting.

I don't know if Tung streamlined her experiences in an effort to keep things simpler for her comics or if this was how things actually went for her, but it took me aback that, as far as I could tell, she only had to go to one job interview before she was offered a job (which involved an "introvert's hell" open-plan work environment she didn't know about until her first day on the job, so I guess the interview didn't involve a quick tour). And her only concern about quitting her job seemed to be that she'd be letting everyone down. Meanwhile, the first things that came to my mind were money and how long it might take to find another job (she opted to become self-employed).

For the most part, though, I really enjoyed this and would recommend it to other bookish introverts. As long as they're not currently involved in a long job hunt. I, uh, have been backlogged with my reviews as of late. Case in point: I read this back in May and am only just getting to it.   If there is a positive to my lazy-assing, I do believe that the further I get away from something I've dealt with, the closer I get to being able to vocalize exactly what I feel about something.  So, there's that.

Anyway, I have scarecly seen this one in at work, so that was how I knew that it might just be something special. Let's be clear here: I view books like this as tending to be next to useless in terms of information, and their calls to action on the part of the reader to better themselves - well, let's just say that they ring hollow.

Nevertheless, it was after I had begun to read this that I realized that if this book was indeed a call to action, it was a horse of an entirely different color than what I had envisioned.

In short, this book is best characterized by the baseline of its pulse: has one hell of an opener, or otherwise I wouldn't have even bothered, a middling center and an okay ending - as long as you close the book before the actual last chapter.  This all evens out to an "okay" book in my opinion, and that's for any person in general who wants to read this.  You can pass on this one if it doesn't look like something you'd want to borrow from the library to enjoy.

I would, however, recommend this book for anyone who considers themselves to be introverted, or is close to someone who is. This book identifies the way that preconceived notions of how the quiet(er) people tend to be cast as untrustworthy, unsavory, wrong as it is, and offers not only background on this, especially in America, while offering panacea to the social ailments for such people.

It reads like a comparison/ a contrast between how the two far polar opposites work and live, as well as a history/sociological analysis of introversion in general. We get something akin to Freakonomics, but for introversion, with each chapter sort of standing on its own, for good or ill. If I have a problem with the historical aspect of this book, as well as the mood in general with this book, it is that even though I often find myself not as big a fan of extroverts on a personality level, the book does that group of people a disservice - hell, both groups - by painting famous introverts in this heroic light that simply is not true and then pussyfooting around this idea that extroverts can be incredibly untrustworthy.. To wit, the bit about Gandhi seems to more reflect that truth that Cain wants to believe, as opposed to actual reality, which is that even introverts are fallible and prone to being tot he far side of the personality, a.k.a, a hermit.

It is this zealous attitude that refuses to admit to mistakes made on that part of these people that Cain uses as examples that really weakens my attitude towards the narrative that she is weaving. With this attitude towards introverts of days past and the way that it jumps all around with this episodic feeling that feels unmoored, lost, it can sometimes come off as something like a Chicken Soup for the Shut-In's Soul.

At best, it offers new insight on the whole social aspect to what it means to be a human, not just for introverts, but for extroverts as well. It really makes you think of the instances in the past, when you may have chosen one person over another due to sheer ability to channel their ease in social situations - and how that's dangerous and cruel to the socially awkward. The book also introduces these ideas that marry neuroscience with sociology and psychology, creating at the very least an interesting read on a topic that has yet to be fully invested in, at least in western society.

Cain greatest failure in the book is her inability to pace the anecdotes that should operate as structural support and reliefs from the information being presented, but it instead proves to be meager a first before being used as artificial life support, force-fed bread in the middle of a light meal, a desperate attempt to fill a void left by not enough actual material to lengthen the book out appropriately. As I always say, I will taken a short book that has all the material it requires and lacking in fattening, time-wasting filler over an artificially, growth-hormone jacked one any day, any time.

And then comes the final chapter. Or, as I like to refer to it, Captain Obvious' Epilogue.

The "advice" being presented here in this chapter is past the borderline in how insulting it is to the intelligence of Cain's audience. Even as someone without children, I already understood every point that she brought up from being a child myself and living in a society where I see family units with children of all ages on a near-daily basis. Please, if you read this, even if you have children, do not bother with this, it is a vestigial limb that should have been severed in a final edit before it ever saw the light of day, you are missing absolutely nothing here.

In short - borrow this, don't buy this, and then buy this if you really like this after all.  But seriously, I wouldn't bother.  You read it once and you got it.