Log in with Facebook
or
Wrong email address or username
Sign up
Already on BookLikes? Log in!
Incorrect verification code
Please, check your email, the code to access your BookLikes blog was sent to you already.
Enter code:
« Back Send
back to top
Search tags: kerrigan-byrne Famed and brilliant, Lady Alexandra Lane has always known how to look out for to herself. But nobody would ever expect that she has darkness in her past—one that she pays a blackmailer to keep buried. Now, with her family nearing bankruptcy, Alexandra strikes upon a solution: Get married to one of the empire’s most wealthy eligible bachelors. Even if he does have the reputation of a devil.

I should start out by saying that I’ve read a number of books by this author and have liked them all. That said, I have a love/hate feel for this book. It was very well written, emotional, and perfect for the current feel of what really happens to women who are forced to feel powerless. My hate is the premise of it. Due to my own personal experiences, I avoid books that have anything to do with sexual assault. When I saw the #Me Too dedication, I wanted to stop right there as I had a bad feeling. I did continue because I do like the author but I did trudge on. 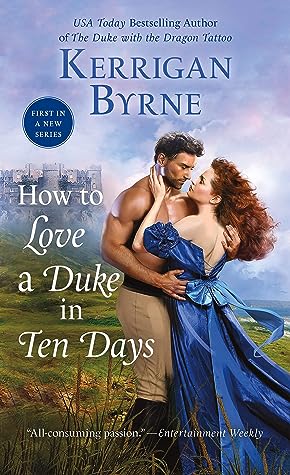 Devil You Know #1, The first book by this author I read was the end of the Victorian Rebels series catching that one at the end, and really liking it, I made sure I caught this series at the beginning. From the first page this book pulls you in it emotionally ties you the the three young ladies (at the time) when a traumatic experience binds them together for life. Alexandra, Cecelia, and Francesca bonded in boarding school they were rambunctious girls who formed a group just for them The Red Rogues and gave themselves nicknames and pretended what it would be like if they were men. When they left school they knew each other's darkest secrets, Including the truth about Francesca and her family which she has vowed to find and punish whoever killed them. Fast forward ten years Alex has a doctorate in archeology, Cecilia is a mathematical genius and Francesca has continued her search for her parents killers which may have just lead to the Duke of Redmayne's door.

Piers Atherton, Duke of Redmayne, was a great hunter going off to all sorts of places hunting for the sport of it until a jaguar caught him by surprise and left him with a claw mark on the side of his face; a wound he almost didn't recover from. Upon his return he finds his fiance married his cousin after some time Piers knows he needs to marry to fulfill his duty as duke so he re-establishes an old marriage contract between Francesca's Father and his. But when Francesca's best friends arrive he's completely taken with Alexandra. Alexandra is being blackmailed for what happened at school and her family is going bankrupt when she offers herself up to Piers instead of Francesca in exchange her parents get the bride payment. Piers agrees as long as Francesca does too and the next day they are married and off to spend their honeymoon in Paris at an archaeological dig Pier's cousin setup to to excavate the ruins of what might be an ancestor of the Redmayne line. But things only get more complicated as it becomes clear someone is trying to assassinate either Piers or Alex and when Piers discovers Alex isn't a virgin he thinks the worst of her when his accusations couldn't be further from the truth.


Overall, the intrigue and the romance together make this book just so good! Piers is so aggravating at times so oblivious to what's right in front of him. Alex is so strong but yet vulnerable at the same time. I loved these two and the mystery of the blackmail and the assassination attempts really keeps you hooked. I love the epilogue and tease about Cecelia can't wait for the next book.

Impressed, awed, entangled, absorbed, love, all words to describe how I feel about this book. How to Love A Duke In Ten Days is a magnificent historical romance by Kerrigan Byrne. Ms. Byrne has provided readers with a book that will suck them into this story and keep them guessing. This story is well-written and a smooth read. Kudos to Ms. Byrne for the stellar cast of characters she has created, I loved them! Alexandra is raped but kills her attacker. With help from her friends and a servant, they bury him but now she's being blackmailed. Piers is the Duke of Redmayne, scarred and fierce. Piers and Alexandra's story is packed, cover to cover with drama, action, steamy sex, suspense and humor. A solid 6 star read for How To Love A Duke In Ten Days, I can't wait to read more from Kerrigan Byrne. How To Love A Duke In Ten Days is book 1 of the Devil You Know Series but can be read as a standalone. This is a complete book, not a cliff-hanger.

I read a print copy of this book that I won from Goodreads. All thoughts and opinions are my own.

How to Love a Duke In Ten Days opens with an intense scene that certainly pulled me into the story. From that point, I had to know what would come of Alexandra and what her future would hold. We do know a bit of that going in just from reading the blurb, but that's just the tip of the iceberg. Kerrigan Byrne balances darkness and light so well, and she draws her characters equally well. There's no sitting back and watching this one unfold. The writing style pulls you in and makes you experience the emotions along with the characters. The chemistry between Alexandra and Piers is off the charts and I love that Alexandra is such a strong woman. The story is almost fairy-tale like, and I thoroughly enjoyed the whole thing.