Log in with Facebook
or
Wrong email address or username
Sign up
Already on BookLikes? Log in!
Incorrect verification code
Please, check your email, the code to access your BookLikes blog was sent to you already.
Enter code:
« Back Send
back to top
Search tags: oxford My plans of reading the plays in order have been thwarted again, but since the NT at Home will show Coriolanus (the Donmar Warehouse production starring Tom Hiddleston) this week, I'll try to read the play before Thursday.

This is also one where I do not have the Arkangel audiobook to accompany me (and I don't have a spare credit at the moment). So, this will be "text then play" reading.

I'm excited about the Hiddleston production, tho. I was really impressed by his portrayal of Prince Hal / Henry V in The Hollow Crown. 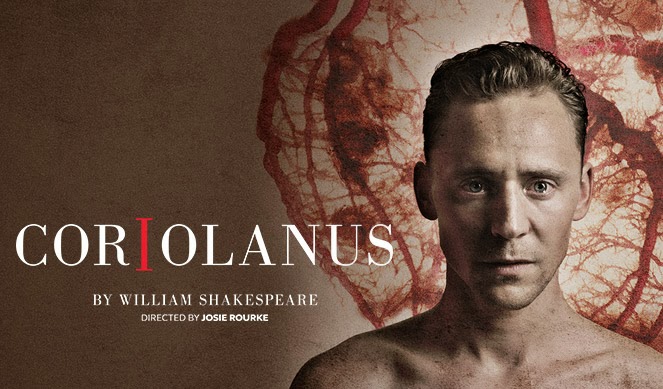 Love is merely a madness, and I tell you, deserves as well a dark house and a whip as madmen do; and the reason why they are not so punished and cured is that the lunacy is so ordinary that the whippers are in love too.

I loved this quote. As You Like It is probably most famous for its "Seven Ages of Man" speech, which is fabulous of course, but it was the above quote that called out to me most in this play.

And of course, there we a few young men, who had no idea what they were doing or what they were looking for really - and there was a fool. Or were they all fools?

The theme of exile had promise for development into something, but Shakespeare didn't take up the challenge here. I guess he wasn't ready for that play, yet. The Tempest would develop later, so would The Winter's Tale.

The idea of star-crossed bonds had promise, too. And this is an idea that Shakespeare used before, yet again only hinted at but chose to not really develop in this play.

So, what was left?

Despite an interesting start, Shakespeare seemed to have lost interest, or time, or both, and basically fell back on the same formula of farcical and really, really dumb romantic comedy that made Comedy of Errors look like a bonkers but inane masterpiece.

I am seriously done with Shakespeare's comedies. ... Tho, I know, I still have at least one more to suffer through (The Merry Wives of Windsor).

Nevertheless, there is one thing I would like to recommend: I mentioned  the Arkangel Shakespeare productions in reviews of previous plays, but with respect to As You Like It, the Arkangel audio production really was what held my interest on the play until the end.

The production included musical pieces for all of the songs included in the play, and those were brilliant.

So, I feel like I should rate the play and the production separately: This one is a re-visit for me. I've first encountered As You Like It performed at the Globe of the Great Southwest in Odessa, Texas, in 1998 or 1999.

I don't remember much of the play.

I do remember the theatre, tho. It was memorable - both in how much it was not The Globe and in how well the building worked to enjoy theatre performances in comfort. It was a great place to watch plays. Hooray for impromptu buddy reads! And Hooray!!! for the National Theatre and the Globe Theatre both streaming plays during the lockdown!

So, the NT will stream Twelfth Night from Thursday, which is reason enough, if indeed a reason was needed, to read the play before watching the production (I think it's the Simon Godwin production with Tamsin Greig as "Malvolia").

Anyway, @Lillelara and I are diving into another Shakespearean comedy... That was fun, but I'm still no fan of Will's comedies.

Still, this was one of the better of the comedies I have read so far (I am not a fan of A Midsummer Night's Dream) and there are elements that I really loved in this:

For one, there are ideas in this play that seem to re-appear in later plays, and in more thought-out scenes.

Once Shakespeare was fond of an idea, he seemed to use them again and again.

There was one particular plot element that resembles one in Romeo and Juliet so much it made me laugh.

There was another that foreshadowed a scene in a much later play.

I have said this before, but even if I don't love every play I am reading during this project, I love seeing the development in the way that Shakespeare wrote the plays.

I love how he develops his characters more deeply as he writes more plays, how their voices and personas become more confident and more comfortable in their own skin, and how this seems to give the author more time to focus on the content of the play, on the ideas, rather than having to convince the reader/audience of his ability to create characters.

And yet, apart from the interplay between two characters, which in itself seemed like an attempt to make good and re-write the messed up relationship we got to witness in The Taming of the Shrew, I just could not get into the play as much as I had hoped.

Maybe this was because there still seemed to be some elements of the plot that too much resembled some of the unreasonable courses of action of other Elizabethan revenge plays, when I had come to expect more...and better.

As for comedy, no, that just was not Will's forte.

So, even tho Beatrice and Benedick were fabulous, they could not make up for some of the other ridiculous plot twists and unfathomable characters.

BENEDICK Then is courtesy a turncoat. But it is certain I am loved of all ladies, only you excepted. And I would I could find in my heart that I had not a hard heart, for truly I love none.

BEATRICE A dear happiness to women. They would else have been troubled with a pernicious suitor. I thank God and my cold blood I am of your humour for that. I had rather hear my dog bark at a crow than a man swear he loves me.

BENEDICK God keep your ladyship still in that mind. So some gentleman or other shall scape a predestinate scratched face.

BEATRICE Scratching could not make it worse an 'twere such a face as yours were.