Log in with Facebook
or
Wrong email address or username
Sign up
Already on BookLikes? Log in!
Incorrect verification code
Please, check your email, the code to access your BookLikes blog was sent to you already.
Enter code:
« Back Send
back to top
Search tags: post-apocalyptic-fiction 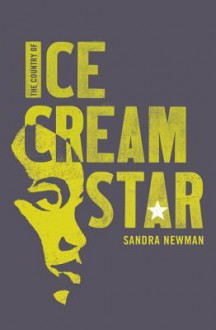 The Country of Ice Cream Star came to me almost by accident.  The library on post hosted an event around Valentine's Day called Blind Date with a Book.  I chose one based on nothing more than a genre and a vague blurb.  And it was unlike anything I've ever read.

It is a post-apocalyptic, dystopian, young adult novel set in the future.  It takes place in the remains of what was once the United States.  But disease and war has left the country decimated.  The overwhelming population is black or Hispanic, and even this population is left with a crippling disease that leaves what's left of the country run by children.

The story was fantastic, filled with sometimes subtle messages about society and values.  Faith, or the lack of it, plays a huge role in how new micro-societies have been formed and how they are run.  There are shreds of recognizable faith from our own reality, but it has been changed by the experiences these children have gone through and by time.  Race, too, plays a pivotal role.  It highlights how assumptions about race can evolve into entire belief systems.

But the most distinctive aspect of this book is the patois.  This is what made the book almost magical to me.  The book was written in an evolved version of street language, peppered liberally with Russian and French derivations.  Not just the dialogue, but the entire book.  From a technical standpoint, this awes me because of the sheer creativity it takes to undertake such a thing, and to do it successfully.  And this is not a short book.  As a linguist, this got my juices flowing.

Is it difficult to read?  Yes, it can be.  Having the language background that I do probably helped a little because I recognized a lot of the root words as French and Russian and could translate those easily.  Sometimes it was the evolved English that gave me the most trouble, words that had developed over fictional time to be used in different ways, in different forms and contexts.  Nouns that are now verbs.  Verbs that have become nouns.  Even familiar places are made unfamiliar with the new language.

This patois is something that I've seen turn many readers away, but I urge you to give this a shot.  It probably does take a great deal more concentration to read it, but the story is well worth it.  And the concept is just so unique that the experience is fantastic. 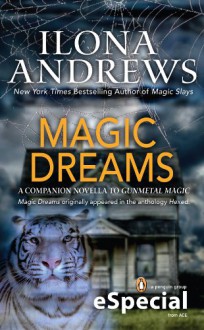 This is the novella I've been wanting! The story of Dali and Jim. It is something that was teased in one of the earlier novels, but I've been wanting this story. It is the romance of two unlikely people and I loved it.

I have loved Dali from the moment we met her. She is so quirky! She's a shifter, one of the most celebrated in the shifter world. But she's a vegan. Yes, a vegan shifter. And shifting isn't easy for her. And on top of that, she is practically blind. She has self-esteem issues of the highest sort and compensates by drag racing, despite her eyesight. I love her. And then there's Jim. Usually surly, he's the head of security for the King of the Beasts. And, for once, he has to rely on someone else to help him. Enter Dali.

The romance is sweet and rife with all those bizarre issues that exist in relationships. And then if the romance is between shifters? Well, things only get more complicated.

Overall: This is a great side story to the series. They are two very different characters and their relationship is just one I rooted for. 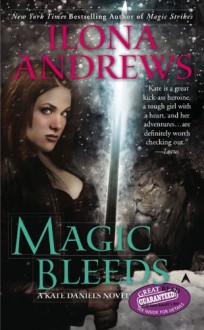 I think Magic Bleeds, the fourth novel in the Kate Daniels series, is my favorite. I loved everything about this book. The story, the characters, the mythology, the action. All of it combined to make a novel that was hard to put down!

Kate Daniels is probably my favorite female protagonist. She is fierce and strong. She knows her own mind and she isn't afraid to speak it. She is smart and independent. She is funny and brave and everything I want to be.

All of these things make her the kind of person that won't back down from a fight when it is for something she believes in. And that is truly the premise of the novel. She finds herself fighting the battle of her life and it forces life-changing decisions on her, decisions she never dreamt she would be in a position to have to make.

This story, while just as full of action as the others, felt somehow more personal. Kate has spent a lifetime avoiding personal relationships, whether romantic or friendships. But there comes a time when those things develop and now she has to make the worst kinds of choices.

A lot of questions are answered in this book, but by no means is the story over!!

Overall: The best yet! 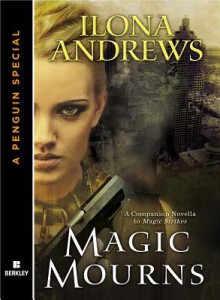 Magic Mourns is a companion novella in the Kate Daniels series. This one tells the story of Andrea Nash, Kate's best friend and a Knight of the Order.

Although Kate is in the book, this story is almost exclusively about Andrea. While it is possible to enjoy the series without reading this, I personally liked learning more about Andrea.

Andrea's history is not a happy one, but it goes a long way to explaining who she is as an adult. She is a woman who feels like she has to prove herself each and every day. And while her reasons might not be your typical ones, I think it is a response that many women can understand.

There is also quite a bit more romance than in the other books. But perhaps romance is the wrong word. Romance among shifters can be a combination of stalking, violence, dysfunction, and love. Oh, to be a shifter...!

Overall: This is a short read, but it a good one. I enjoyed Andrea's story! 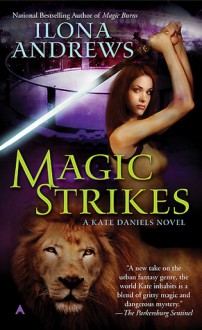 This series just gets better and better! Magic Strikes is the third book in the Kate Daniels series and I loved it just as much as the others.

In this one, Kate has been drafted to work in the Order as a sort of liaison between the Pack and the Order. She is on shaky ground with them, even though her mentor was a Knight of the Order and held in high esteem. But Kate quit before earning her Knighthood and is a bit of an authority-hating rebel.

These books are action-packed and thoroughly engrossing. But for me, the characters are what really bring me in. We learn more about Kate, her past, and why she is the way she is. The story of Kate is fascinating and tragic at the same time. Curran plays a big role in this novel and I love his character, too. It would have been too easy to make him the alpha male, all brawn, and no brains type. He is an alpha male, but he is so much more than that. He is smart and just and surprisingly amusing. Derek, one of my favorite shifters in the story, is significant in this novel. I loved his story almost as I did Kate's.

The mythology is fantastic in these books. The way it is woven into the mythology of the world is creative and seamless and adds a really rich layer to the entire series.

Overall: This has quickly become one of my favorite series and it is one I highly recommend!