Log in with Facebook
or
Wrong email address or username
Sign up
Already on BookLikes? Log in!
Incorrect verification code
Please, check your email, the code to access your BookLikes blog was sent to you already.
Enter code:
« Back Send
back to top
Search tags: the-mask-strikes-back 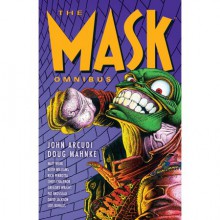 The real deal is the comic book version, not the movie adaptation. The movie was more of a friendly, nicer and fun comic with Jim Carreytaking the role of Stanley Ipkiss but for this original version, the comic takes place in characters that taken to wear the mask, and a more darker sinister approached but funnier than the movie. This is the second edition of an out-of-print omnibus of The Mask that collects The Mask, The Mask Returns and The Mask Strikes Back.

The Mask - When Stanley Ipkiss bought weird looking green color mask for his girlfriend Kathy, little did he know that what he holds will give him whatever he wish, true his dark side. Better known as Big-Head Killer, Ipkiss wretch havoc all over town and attracts mobsters and a giant named Walter that will stop him with any thing... if only they know the real power is in the mask.

The Mask Returns - The Big Head is back and now the mobster has it. More chaos, more havoc and more destruction... but is Big Head a 'he' or a 'she'. Lieutenant Kellaway had took the mask and took advantage of it and only Kathy will do any thing to stop Big Head... including Walter.

The Mask Strikes Back - When a young guy discovers the mask, his dreams come true - to be Big Head. Three of his friends too wants to be Big Head. The sighting of Big Head attracts Lieutenant Kellawayand the mob and will do any thing to stop the madness... including Walter.

The first two mini-series is a classic of its own. Writer John Arcudireally creates an interesting character that delves into the hidden desires of a person that corrupts a soul before the mask takes over. Doug Mahnke artwork had change to a more solid outline from the first appearance to the last (except for The Mask Strikes Back). While the second sequel pale in comparison of its two predecessors, this second edition is for those who missed out the first omnibus series, that has bad binding. This edition the binding is much more solid. If you haven't read The Mask of any of the comic books or you had enjoyed the movie adaptation but wants to read it (and believe me, its a whole different read), you can always pick up this edition at your local comic bookstores. I really love it.