Log in with Facebook
or
Wrong email address or username
Sign up
Already on BookLikes? Log in!
Incorrect verification code
Please, check your email, the code to access your BookLikes blog was sent to you already.
Enter code:
« Back Send
back to top
Search tags: winter-2016 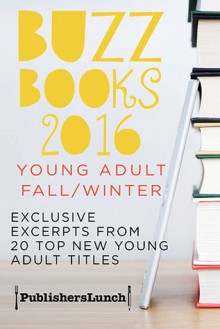 I've read several of the Buzz Book Publications and have greatly appreciated the reference they provided in helping decide what to read, and specifically, what to read next! The YA 2016 fall/winter edition was certainly no exception. I've been on a bit of a YA kick as of late, fueled in part by all the attention the genre gets on book tube and blogs that I follow but there are always so many new books coming out all the time in this genre, that it's hard to narrow it down to the one book I'm capable of reading at one time. I've found that often I either love ya or hate it and can usually tell with in the first chapter or two what category a book will fall into, not always, but most of the time. With that being said this handy dandy little reference is must have for me and readers like me and I've found it to be an excellent tool for helping me find excellent reads, beefing up my tbr shelf significantly, and also in steering me away from books that have gotten good reviews but either aren't what I was expecting or don't appear to be something I would enjoy. This particular edition is of 20 different fall/winter 2016 YA reads and it includes, for each novel sample featured, a brief summary, a lengthy excerpt from the books, and a small bio about the author, in that order. I believe that any and all readers who enjoy reading from the YA genre need this little gem on their bookshelf. I easily rated it 5 out of 5 stars - now that's not to say that all 20 of the featured books with samples within deserve, or will receive, 5 stars individually, but this publication as a whole, which readers the opportunity to gain insight and reference on their next read, is certainly deserving of 5 stars, in my opinion.

I received a copy of this publication from Netgalley in exchange for my honest review.
Like Reblog Comment
show activity (+) 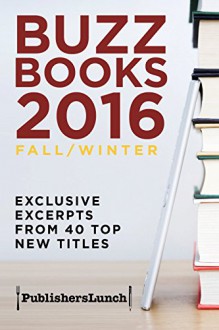 Much like its YA counterpart, I'm always looking forward to the next Buzz Books collection. The only disadvantage of it arriving in May is that I will have to wait to January for the next one.

If you're looking for a great way to sample the upcoming books from the next season. Look no further. For reviewer convenience, many books have links in them to the request page on Netgalley. It was never easier to read book (and never harder to resist),

Whether the books in the collection will be your cup of tea depends a bit. This one wasn't the one with a whole lot of books I just couldn't resist, but that's all the better since in that case I won't have to add them to Mt TBR.

Yeah! The new Buzz Books collections are always something I'm looking forward to. If you enjoy browsing new books, I'm sure you'll like this Buzz Books.

This particular collection I quite enjoyed. There are some very interesting books in the batch and some very lovely covers I really loved. However, what I enjoyed best was the fact that I noticed it became easier for me to resist requesting way too many books.

Does this mean I'm at the start of the road to recovery?

Wow, it's been a really long time since I did a recap post. In October, I wrote a book talk, but I didn't even mention my blog posts. The last time I did a recap, then, was in September! So much has happened here on the blog, I've read so many books and gone to some great book launches, and I've received and purchased quite a few books as well!

Ah, well. This post was supposed to go up two weeks ago, along with a video that I had recorded in the usual recap way. :/ But basically I'm still trying to catch up with the posts that were scheduled for my time off but didn't go up.

On the blog, I have been maintaining my bookish rounds posts, which are round-ups of the latest MG/YA/NA book news in terms of book deals, cover reveals, discussions in the book community, tv and movie adaptations, and new YA releases. Since September, you'll findedition 88, edition 89, edition 90, edition 91, edition 92, edition 93, edition 94, edition 95,edition 96, edition 97, edition 98, edition 99, and edition 100. And, in fact, in terms of the book news, I gathered half of last year's adaptation news for a round-up post, and I made a calendar with 2016 Adaptations relevant to the YA community, so we could keep track of them. I discussed Mockingjay Part II, my New Year's Bookolutions for 2016, 2016 YA Debuts on my TBR list, 2016 YA Books (Non Debuts) on my TBR list, blogging and booktubing, the effect of awards in the YA community, my reading profile, reader loyalty, and 5 fantasy authors who I fangirl over. I reviewed Dreamstrider by Lindsay Smith, the Eon duology by Alison Goodman, the Mapmaker's trilogy by S.E. Grove, Passenger by Alexandra Bracken, and The Mirror King by Jodi Meadows, and gushed about my Epic Reads Book Shimmy Award Nominations and the best books that I'd read in 2015. I also asked for read-along buddies, and answered 15 weird questions about myself so that y'all could get to know me better.

Fall 2015 & Winter 2016, I didn't blog or booktube more frequently because in the fall, I’d been applying to graduate schools, and then there were the holiday breaks (aka laziness at home), and throughout February, I had a bunch a few graduate school interviews to attend (aka why you didn't hear from me much on social media then either). Maybe one day soon, I'll have actual big news to celebrate on that account. (Pray for me! Cross your fingers! Whatever you do.). In January, I attended the book launches for Truthwitch by Susan Dennard/Passenger by Alex Bracken and This Is Where It Ends by Marieke Nijkamp. I appreciated Marieke’s discussion on how the story was inspired, in part, by a yellow school bus, and the discussion of American gun culture vs. in the Netherlands. I appreciated the easy banter between Susan and Alex, and their personable approach to describing their writing styles and their experiences (e.g. researching ships in the eighteenth century). I loved how both events were moderated by other YA authors as well (Sona Charaipotra (Dhonielle Clayton was supposed to be there but I forget what happened) and Erin Bowman). And I ended up purchasing all three books for the book launches, as well as books by the author hosts. Here's to hoping grad school fares well too, so that I can say the season was an all around success :D.

In terms of what I've read this past fall and winter.... oh, what a varied list. I’m going to just list them out, and say a few things at the end!

What’s the deal with all the romance novels? Well, I’ve mentioned this before, but I share my Kindle account with my mother. You’d think this means she’d be more willing to read YA novels—alas, those are all just mine. Anyway, she loves contemporary and historical romance. The majority of the romance novels I read this past fall/winter, I read when I was at home with her. Usually when we’re together I remember that oh shit, I’m supposed to buy more romance novels for her to read. But it doesn’t feel right to just buy her anything out there – in some ways, I get caught too because then I want to make sure I’ve gotten her books that she’ll like. Like Alice Clayton. I read Alice Clayton’s book because I’d posted her cover reveal sometime ago, and I remembered writing that this was a new NA series for her, or she was continuing on Wallbanger, and it was pretty popular. So I tried the books out – I liked them, and my mom loved them. My mom also loves Tessa Dare, and Sarah MacLean and Courtney Milan are automatic pre-orders for her as well.

The young adult and middle grade books went pretty well, and I looooooove the Captive Prince trilogy, so yaaaaaas. And hey, look, I read about 32 books from late November to the end of February. Not too shabby, eh? And now interviews are over… :D :D

1. The Voyage to the Magical North by Claire Fayers
2. The Treasure of Maria Mamoun by Michelle Chafoun
3. The Wrong Side of Magic by Jannette Rallison
4. Wink Poppy Midnight by April Genevieve Tucholke, which was in my 2016 YA Books on My TBR List (and which I now read -- expect a review soon!)

The Voyage to the Magical North is about a girl and her friend who join a pirate’s quest to find the Magical North, which sounds like a place of secrets and myths and lots of fun. The Treasure of Maria Mamoun is an island adventure about a girl from the Bronx on a journey of mystery and discovery. The Wrong Side of Magic is a modern-day retelling of The Phantom Tollbooth, and all three are Middle Grade titles. I haven’t requested many ARCs as of late, and well, I’ve been more in the mood to read MG, as if it’s easier to review MG because I’ve read so much YA at this point, I almost feel saturated. Have you ever gotten that feeling? Do you think that that’s just a part of a reading slump or something more lasting? I was excited for Wink Poppy Midnight, and it was great – the book was also my first ARC from Penguin Random House. I’m a kind of a passive blogger uninterested in emailing publishers for ARCs, but if I’m sent the request form, I do look through the catalog. It’s always unexpected for me when any of that turns out, and I was doubly excited for Wink Poppy Midnight since it was in my 2016 YA Books on My TBR List. Did not disappoint!