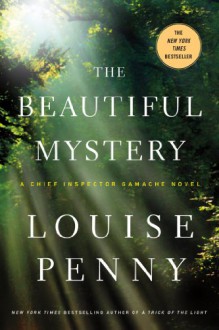 But when the renowned choir director is murdered, the lock on the monastery’s massive wooden door is drawn back to admit Chief Inspector Armand Gamache and Jean-Guy Beauvoir of the Sûreté du Québec. There they discover disquiet beneath the silence, discord in the apparent harmony. One of the brothers, in this life of  prayer and contemplation, has been contemplating murder. As the peace of the monastery crumbles, Gamache is forced to confront some of his own demons, as well as those roaming the remote corridors. Before finding the killer, before restoring peace, the Chief must first consider the divine, the human, and the cracks in between.
show less
Format: paperback
ISBN: 9781250031129 (1250031125)
Publish date: 2013-07-02
Publisher: Minotaur Books
Pages no: 400
Edition language: English
Category:
Mystery

5 years ago
http://oblue.booklikes.com Abandoned by Booklikes 2.0 Subpar Gamache
text Subpar Gamache
This Gamache doesn't hang together very well. When Gamache and two of his team are called to a monastery to investigate a murder, things once again come to a head with Jean- Guy and Gamache's supervisor who is intent on making him pay for not being corruptible. I also didn't get much of the discussi...
See review

7 years ago
http://CarpeLibrum.booklikes.com Carpe Librum 2.5 The Beautiful Mystery by Louise Penny
text The Beautiful Mystery by Louise Penny
I seem to be one of the few people who isn't in love with this installment in the Gamache series, so I'll keep this brief. The anti-Christian views of the author come through constantly and clearly in this novel. As the setting is a monastery rather than the storybook Three Pines, there are plenty...
See review

7 years ago
http://Darthpony.booklikes.com Darth Pedant 4.0 The Beautiful Mystery
text The Beautiful Mystery
I avoided this book for weeks because I've gotten so attached to the characters that I couldn't stand to see one of them strapping on a jetpack to speed up their downward spiral. Ye gods, that was painful. The writing was beautiful as always. I really enjoyed everything to do with the murder inv...
See review
see community reviews