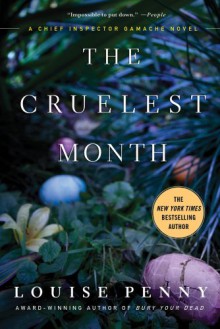 But not everything is meant to return to life. . .

When some villagers decide to celebrate Easter with a séance at the Old Hadley House, they are hoping to rid the town of its evil---until one of their party dies of fright.  Was this a natural death, or was the victim somehow helped along?

Brilliant, compassionate Chief Inspector Armand Gamache of the Sûreté du Québec is called to investigate, in a case that will force him to face his own ghosts as well as those of a seemingly idyllic town where relationships are far more dangerous than they seem.
show less
Format: paperback
ISBN: 9780312573508 (0312573502)
ASIN: 312573502
Publish date: 2011-04-12
Publisher: Minotaur Books
Pages no: 320
Edition language: English
Category:
Cultural, Mystery, Thriller, Mystery Thriller, Crime

5 years ago
http://thursday48.booklikes.com Lindsay's Book Log 2.0 The Cruelest Month
text The Cruelest Month
I'm not sure if I was just in a slump or what but the beginning of this book was killing me I was so bored and didn't care. The second half of the book was better but the sub plot seemed odd and a bit slap dash even though it's been set up for three books. I don't know maybe I just wasn't actually i...
See review

5 years ago
http://oblue.booklikes.com Abandoned by Booklikes 4.0 An Older Three Pines
text An Older Three Pines
I really need to get a timeline down on the events that have happened to our main character and the villagers of Three Pines. Both seem tied together in my head, but you realize that things have occurred to Chief Inspector Armand that colors how he investigates now. I really wish we had gotten more ...
See review

5 years ago
http://clkbooks.booklikes.com Books & Chocolate 3.0 The Cruelest Month
text The Cruelest Month
This is the third book in the series, and Inspector Gamache is back in Three Pines for another murder. I don't read many series where the community is just as much a key part of the overall story as the basic plot. Usually, it's too many people for me to keep track of and I prefer more streamlined s...
See review

7 years ago
http://CarpeLibrum.booklikes.com Carpe Librum 4.0 The Cruelest Month by Louise Penny
text The Cruelest Month by Louise Penny
This series is habit forming. I have quickly devoured the first three books and have the fourth downloading right now. The characters are eccentric to an unrealistic extreme, and no town with this many people dying would be termed idyllic, as Three Pines often is. But somehow as you read this beauti...
See review
see community reviews